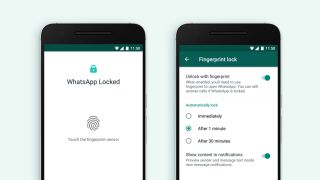 After testing the feature on beta users for a little while, WhatsApp is now rolling out fingerprint unlock to all Android users. It brings biometric security to Android some 8 months after similar options landed on iPhone.

The Fingerprint Lock security feature is available in version 2.19.222 of the Android WhatsApp app, and it gives Android users a security option that is more in line with what is available in the iOS version of the app. iPhone users already have Touch ID and Face ID support, and now WhatsApp says: "today we're introducing similar authentication, allowing you to unlock the app with your fingerprint, on supported Android phones".

For now, at least, fingerprints are the only security options available. WhatsApp has not enabled face unlocking for Android users, nor suggested that it will in the future.

Once enabled, the feature prevents other people from accessing WhatsApp and reading your messages. The only way to get into the app is to scan a registered finger. The description of the setting within the app explains: "When enabled, you'll need to use fingerprint to open WhatsApp. You'll still be able to answer calls if WhatsApp is locked."

You can also choose how long WhatsApp should wait before it locks – either immediately, after a minute,or after 30 minutes.