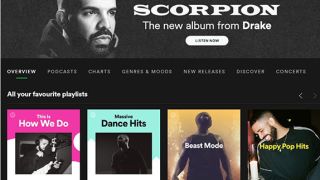 A new Drake album was always going to be popular, despite what you think of the rapper’s music. But Scorpion has exceeded all expectations and become the first album to be streamed 1 billion times in a week.

This is according to Billboard, the music heavyweight that has recently changed the way it makes its charts, giving streams more weighting given this is how most consume their music now. It also reports that Drake has become the biggest artist to be streamed in the US in any given week, knocking Post Malone’s Beerbongs & Bentleys from the top spot - it managing just 413.3 million streams to Drake’s mighty 750 million.

It also means Drake now takes four out of the top 10 best-ever streaming weeks, alongside the debut week of his fourth album Views and the first and second week's streams of his mixtape/not a mixtape More Life.

Drake’s album may have been something of a surprise - it was released with little-to-no pre-hype but when it did arrive, everyone knew about it. This was thanks to a - now criticized - advertising exercise for Spotify. It saw fit to add Drake’s face to every single playlist Spotify has on its platform, regardless whether the playlist had a Drake track in it or not.

Like musical knotweed, Drake is everywhere, hard to ignore and it will be tough to usurp his album anytime soon.

Billboard’s new charts has Scorpion shifting the equivalent of 700,000 albums sold. Given Taylor Swift’s Reputation did similar numbers, this puts Drake in esteemed company. And it was only a few years ago, Adele was celebrating 25 beating Oasis' Be Here Now record of an opening week for an album.