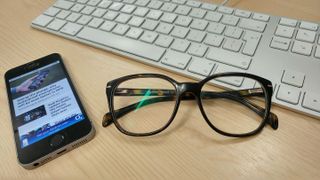 Take the following with a hearty heap of salt, but a newly leaked incident report may further confirm Apple has an augmented reality device in the works.

The report, issued on April 14 by an Environment Health and Safety contractor working on behalf of Apple, was accidentally sent to a few hundred employees before making its way to Gizmodo.

It describes in limited detail more than 70 incidents in which Apple employees had some kind of safety-related issue at work. These include an employee running into a door, someone burning his hand when taking fish out of an oven (likely at an on-campus cafe), a woman feeling lightheaded and employees encountering hazardous materials.

In what sounds like a fairly routine report are a pair of incidents that potentially point to an Apple AR product in testing: two people experienced eye injuries when using prototypes.

One person required "medical treatment beyond first aid" after she experienced eye discomfort while using a "prototype unit".

"After BT4 user study, user advised study lead, that she experienced discomfort in her eye and said she was able to see the laser flash at several points during the study," the report reads. "Study lead referred her to optometrist and secured prototype unit for analysis."

"See the laser flash" is a phrase that leads us to think the tester was looking through something when she developed an eye issue, though that's our speculation.

In another incident, an employee "reported eye pain after working with new prototype, thought it may be associated with use." The prototype in question was potentially tampered with, the report notes.

Gizmodo spoke to a source at Apple who mused the second incident may involve an AR device Apple is possibly testing, though this person didn't offer any hard evidence. The publication notes the device is "something like glasses with an overhead display."

Of course, without knowing what kind of prototypes the employees were using, we can't know for certain it had anything to do with augmented reality, let alone are devices worn like eyeglasses or a visor that goes on the face.

It's even possible the prototypes are versions of the iPhone 8, which is rumored to have augmented reality features when it launches later this year.

Months of reports have indicated Apple is working on some kind of augmented reality product, and CEO Tim Cook has spoken on numerous occasions about his preference for AR over virtual reality. He has hinted, however, that the iPhone could be in for augmented reality features first.

The leaked report provides some back up to the cacophony of rumors that Apple is developing an AR device, but it's likely we won't see what the tech giant has made for at least a few more months.

Apple's next major event is the WWDC 2017 developer conference in June, followed by the expected iPhone 8 launch event in September. If Apple is ready to release its AR device this year, it will likely unveil the product at one of these two gatherings.

Let's just hope those eye injury problems are remedied before that happens.