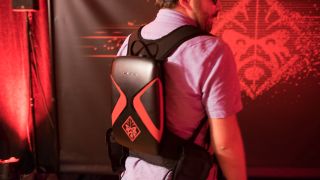 Well, friends, that time has finally come. We've had the opportunity to strap on HP's Omen VR gaming backpack during its unveiling of the Omen X gaming desktop.

And, while being cautiously optimistic, this thing cannot come out soon enough.

How does it feel?

Like we were told back in May, the gaming backpack weighs around 10 pounds, but it definitely doesn't feel that way on your back – even with the battery pack strapped to its side.

You could definitely game for as long as the battery would allow – HP rates it at just 1 hour with hot swaps – with this thing on your back.

The design remains unchanged from what we've seen before: the same sleek, black plastic chassis with red, Omen-inspired accents permeating throughout is here. HP may call this thing a "concept", but I've rarely seen concepts this far along in the design process.

An interesting point, though: for all intents and purposes, this backpack PC doesn't have any straps attached to it. Rather, the device slots into a holster with the straps on it.

You know what that means? This device – depending on what's inside, of course – could easily be your all-in-one home VR solution. That also depends on how much it costs.

What's inside it, and how does it play?

Unfortunately, HP is still being tight-lipped on both cost and what components the thing uses, so we'll have to wait on that. (However, considering when the concept was first outed, chances of it being something other than a laptop-grade Nvidia GTX 980 are mighty slim.)

Playing a game in VR with the backpack attached feels like a breeze. The weight of the backpack doesn't bear down on you any more than the HTC Vive headset does.

Actually, you might feel the need to quit a session on account of the headset before the backpack – but I personally find HTC's headset to be the least comfortable of the lot.

As for the game fidelity running off of such a device, it's nearly perfect. Running Valve's Steam VR Lab, we enjoyed firing off flaming arrows at stick figures for a few minutes with zero stuttering or slowdown. So, whatever they have in there is doing its job well.

However, we noticed that – unsurprisingly – the device gets awfully hot during play. I personally reeled a bit after the PC portion of the backpack brushed my arm as I was strapping it on. Honestly, with nigh-flawless graphical fidelity already, this is where HP should be focused in bringing this awesome device to market.

And, HP: get on it already? This virtualnaut in training needs a new rig.