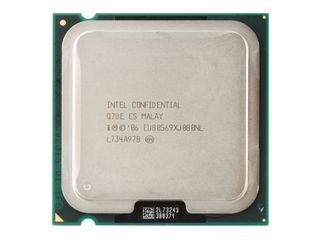 Is the full roll out of Intel's new 45nm PC processors being prevented by a hardware bug? Not according to Intel itself, despite overwhelming internet scuttlebutt to the contrary.

Intel released its first 45nm chip, the Core 2 Extreme QX9650 quad-core CPU back in November last year. At the CES show last week, it added a further nine desktop and mobile 45nm CPUs, all dual-core models to be unleashed before the end of January.

However, it's the absence of any further 45nm quad-core releases that has had tongues wagging and keyboards clattering. Could Intel's 45nm quads be suffering from a bug similar to AMD's troubled quad-core chips?

From there, things get very complicated. Not all models in Intel's new 45nm Penryn family are thought to be affected by the problem. Apparently, none of Intel's 45nm quad-core Xeon workstation and server chips or the existing QX9650 Extreme desktop processor suffer from the bug.

So, it's actually the upcoming mainstream quad-core models, namely the Core 2 Q9550, Q9450 and Q9300 chips, that are bugged out for the time being. How can this be possible, you may be wondering? Because they use a different stepping, or revision, of Intel's 45nm CPU architecture. Or so the argument goes.

If that all sounds a bit fishy, there is an alternative theory, this time put forward by PC Watch. Instead, all of Intel's 45nm chips are equally blighted. But the problem actually involves how the chips communicate over the front side bus.

In this scenario, the noisy bus interface on mainstream quad-core 45nm Core 2 processors only becomes a problem on cheap four-layer desktop motherboards with mediocre signal integrity. For Xeons and Core 2 Extreme chips that typically saddle up with boards with more layers and better signal integrity, it's not an issue.

More plausible? Yes, but either way the supposed result is that those mainstream quad-core chips have been delayed while Intel addresses the problem. And that explains why Intel will only commit to launching them by the end of March.

What does Intel have to say in its defence? How about this. There are no secret bugs blighting its 45nm processors. That's not to say the chips are perfect. According to Intel's Nick Knupffer, "all processors have errata." That's a politely euphemistic way of saying all chips have bugs.

He's got the K-now how

But as with the rest of its range, Intel has published a full list of 45nm 'errata'. It's all completely routine. More to the point, Knupffer says, it's simply not true that any Intel 45nm processors are being delayed due to bugs. "We said we'd launch the first 45nm processors in the last quarter of 2007 and we did. We said we'll release further 45nm models in the first quarter of 2008. And that's exactly what we are doing."

For now we're happy to give Intel the benefit of the doubt. We've seen no evidence of stability problems in the 45nm Core 2 and Xeon processors we've reviewed. But if Intel doesn't hit that self imposed March 31st deadline, well, we'll be back with our magnifying glass and tweezers.