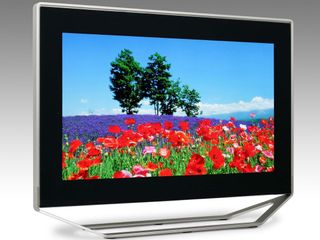 Toshiba's prototype SED panel had a contrast ratio of 50,000:1 with 100,000:1 expected for final production models

SED TVs were supposed to have been the next big thing in the flat panel TVs. We were promised the slim convenience of LCD and plasma TVs, all the picture benefits of older CRTs and none of the drawbacks of either. So whatever happened to SED technology?

SED panels use Surface-conduction Electron-emitter Display technology, which bares many similarities to that found in old fashioned CRT televisions. But instead of having one large cathode-ray tube behind the screen, SED panels have a very small one behind every single pixel.

When an electronic current is passed through each pixel, a phosphor coating on the display panel is excited and illuminates. The practical upshot of which is that the amazing colour definition and response times found in CRT displays can be squeezed into thin panels just like LCD and plasma ones. SED TVs also promised to be cheaper than either of its plasma and LCD rivals.

The technology was conceived way back in the early 1980s, when Canon began researching in the field. And things looked pretty rosy for the technology in 2004 when Canon hooked up with Toshiba in order to put its SED panels inside Toshiba's flatscreen TVs.

Toshiba then displayed working prototypes of the new TVs at the Consumer Electronics Show (CES) in 2006, and later promised to start producing 55 inch SED TVs by summer 2007. But by Christmas that year the date had been put back to 2008 and then came a lawsuit which has blown the entire project apart.

Nano-Proprietary, holder of technology patents key to SED production, sued Canon in early 2007 when it became clear it had shared protected information with Toshiba. This caused a real breakdown in relations between NP and Canon.

Then in May, Canon finally announced that it had decided to postpone the launch of its SED TVs, which it said it had intended to release in the fourth quarter of 2007. Reasons given for the postponement included the prolonged litigation with NP and efforts to establish mass-production technology aimed at bringing manufacturing costs down.

And that's the last anyone has heard of it.

Today's news that Toshiba has turned to rival OLED technology and will begin selling 30-inch sets by 2009 indicates it has abandoned SED technology altogether. And so where are we now?

A call to Canon this week did not yield any information whatsoever. No one seems to know anything, and so it seems that SED could well be dead in the water for the near future at least.