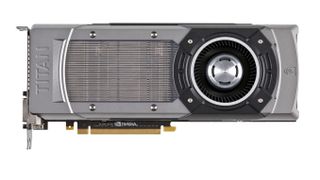 Nvidia has just unveiled the GTX Titan, the fastest single-GPU graphics card we're likely to see for the next two years.

Based on the full-fat Kepler core, the GK110, Nvidia is touting it as the first gaming super computer; one that you can chuck in a small form factor chassis.

Titan means Nvidia has finally reached the top-end of the Kepler lineup. But Nvidia is not calling it a GTX 600 series card, mainly because it will definitely out-perform the upcoming GTX 700 series.

The GK110 is the same GPU that's at the heart of the expensive, professional Tesla K20 card. 18,688 such GPUs that were used in Cray's latest supercomputer, the Titan.

But that doesn't make it the fastest overall graphics card. Nvidia's GeForce GTX 690 and the AMD Radeon HD 7990 also make a good fist of gaming performance for similar money.

The Titan also has a funky new iteration of the GPU Boost tech which is now based upon temperature, not on power as was GPU Boost 1.0.

That now means anything you do to your computer to make it run cooler is now going to make your GPU run faster.

We can smugly tell you that we've been playing with three of these cards for the last week. We're restricted on giving you benchmark figures until we can bring you the review on Thursday, but we can say that when we plugged three GTX Titan cards in SLI into Unigine's new Valley benchmark we almost wept.