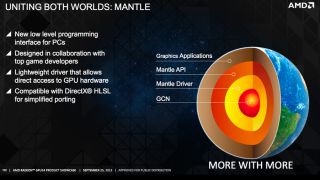 AMD chose the world Mantle to describe its new technology

Since AMD announced its Mantle initiative in September last year, we've been excitedly hypothesising what it could really mean for AMD, its graphics cards, our processors and PC gaming in general. And now it's finally here – with a beta release of Catalyst and a couple of Mantle-enabled apps – giving us an insight into what it's actually going to do for our machines.

Thankfully, one of those Mantle-enabled apps happens to be a favourite, Battlefield 4. Therefore, we've finally got a tangible idea of what performance boost AMD's Mantle API is going to give our rigs in a real gaming environment. DICE has been instrumental in getting Mantle up to speed; without its support, Mantle would be just another tantalising tech demo.

So, what is Mantle? it's essentially a new graphics application programming interface (API) to replace Microsoft's DirectX for AMD GCN cards in compatible games. "When we originally approached Mantle – and I was there the day we decided to do this – we thought: 'y'know, we just want to make games faster.' Here's a way to give developers access as close as possible to the metal – like they can do on the consoles," AMD's Neal Robison told us at CES.

Without all the layers of legacy programming and cross-vendor support in DirectX, Mantle ensures there is little to get in the way of programmers and the hardware for which they are writing code. The interesting thing is that, despite being a graphics API, it's the CPU that's set to feel the real benefit. DirectX introduced lots of processor overhead into games and where they're CPU-bound Mantle will deliver a pretty decent performance boost. But just how much? We've taken a look at three different motherboard/processor combinations with a high-end and more mainstream GPU to see what Mantle can do for you.

The first system we've looked is built around AMD's new APU, the A10-7850K. Despite being its latest silicon, the APU doesn't make a particularly effective basis for a gaming PC. Using the same R9 290 graphics card, the AMD APU is almost 45 per cent slower in Battlefield 4 compared with the similarly-priced Intel Core i5-4570 CPU. However, as soon as you throw Mantle into the mix, the lower CPU overhead closes the gap between the Intel and AMD processors.

While running both machines on Ultra at 1080p in Battlefield 4, the Intel chip still retains a lead, but it's slashed in half. Now the APU is only around 20 per cent behind the straight CPU silicon of the Core i5. At 1080p, this Kaveri system saw the biggest boost in gaming performance. At Ultra settings, it gets some 36 per cent extra frame rate performance, and at High it gets 45 per cent. For a software update that's a great return. The Star Swarm benchmark also displays some huge improvement gains for Mantle over the DirectX codepath.

We also saw some improvements at both 2560 x 1600 and 4K resolutions with Kaveri, though that was only 10 per cent at best. Still, it shows that even when the system is primarily GPU bound it can get a performance boost when it's kitted out with the right card. With the wrong card, though, things aren't so rosy. When the lower-end HD 7870 card is used, the system is GPU bound even at 1080p in Battlefield 4. In fact, it actually negatively impacts performance rather than simply not giving the system a boost.

We were hoping to see the benefits of Mantle giving heavily multi-threaded processors their time in the gaming sunshine with the top-end AMD FX CPU. It is, after all, the cheapest CPU to offer a full eight threads. Sadly, even with Mantle, those eight threads aren't able to push performance past the mighty Intel chips. Still, the FX-8350 is incredibly consistent, even if it can't post the sort of percentage improvements that the A10-7850K offers.

Using the same Radeon R9 290 card, the FX-8350 sees at least a 20 per cent frame rate boost at both Ultra and High settings in Battlefield 4. And that's counting both 1080p and 2560 x 1600 resolutions. This FX CPU displays both the best and worst of Mantle. The Hawaii powered 290 brings the FX up to almost the same sort of levels of gaming performance as the Intel chip – at 1080p, 1600p and 4K the FX-8350 offers average frame rates only slightly behind Intel.

When you bring the HD 7870 into the equation, however, the gaming performance becomes a disaster – at best, Mantle offers a 10 per cent degradation in BF4 frame rates. The GCN cores of the Pitcairn GPU simply don't sit well with the Mantle update in Battlefield 4. Yet Star Swarm shows that it's just a problem with the BF4 code. As you can see, the Star Swarm benchmark can still deliver a 63 per cent performance boost even with the HD 7870. With the R9 290 that increase is a pretty startling 104 per cent, though it is coming from a pretty lowly start point.