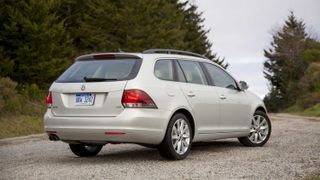 "Today's announcement shows the high cost of violating our consumer protection and environmental laws," said FTC Chairwoman Edith Ramirez. "Just as importantly, consumers who were cheated by Volkswagen's deceptive advertising campaign will be able to get full and fair compensation, not only for the lost or diminished value of their car but also for the other harms that VW caused them."

The settlement covers the 2.0L TDI engine in around 460,000 VWs and 15,000 Audi vehicles 2009 model year and newer. Owners of eligible cars will be able to sell their vehicle back to VW or terminate their leases. Owners can also have VW modify approved vehicles to bring them back within emissions regulations.

Depending on year, model, mileage, trim and region purchased, customers who purchased their VW could receive between $12,500 and $44,000 in buyback cash. Owners with third-party loans can have Volkswagen pay that off, up to 130-percent of what the buyback offer would be. Notices should be sent in the mail no later than Fall 2016 notifying owners and leases about their rights.

Now, before too many dollar signs start popping out of people's eyeballs, the settlement must be approved by the court system (which it should be) and won't be absolutely finalized until at least October 2016, on the 'early' side.

"We take our commitment to make things right very seriously and believe these agreements are a significant step forward," said Matthias Müller, Chief Executive Officer of Volkswagen AG. "We know that we still have a great deal of work to do to earn back the trust of the American people. We are focused on resolving the outstanding issues and building a better company that can shape the future of integrated, sustainable mobility for our customers."

According to some sources, owners of TDI vehicles won't see a less than $5,100 payout in cash compensation. Owners who have already kicked their TDIs to the curb will get a payout, too, but a much less substantial one. The current payout is also less than the $10,000 VW was offering owners before the settlement process started.

Along with the $10 billion for customer vehicles, Volkswagen was also slammed by US regulators of environmental damages. The Environmental Protection Agency (EPA) and the California Air Resources Board (CARB) agreed to a $2.7 billion over a three-year period into an environmental trust to remediate damage done by excessive nitrogen dioxide.

Volkswagen will also invest another $2 billion in zero emissions vehicles (ZEV) over the next 10 years, along with creating infrastructure, access, and awareness about ZEV programs.

This settlement marks a major milestone in the Dieselgate scandal which started in September 2015 when a study found that VW diesel vehicles were equipped with emissions-defeating software which could tell when an emissions testing device was hooked up and change emissions output only for the test. According to the EPA, the defeat devices pumped up to 40-times the maximum emissions allowed during on-road driving conditions.

Nitrogen dioxide creates harmful smog and soot which can result in exposure-based respiratory and cardiovascular health issues, and even a premature death with extreme exposure.

The current settlement does not cover the 3.0L TDI V6 engines that are also affected in the emissions scandal and does not cover any criminal charges that VW may face.