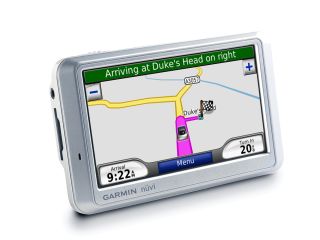 Garmin is launching a range of swanky new satnav units at CES 2008 next week. Four new Colorado models are rumoured, along with a widescreen version of the Garmin nüvi 260 and a revamped Garmin nüvi 780 unit, says Engadget.

The most interesting additions are the Garmin nüvi 860 and Garmin nüvi 880 units, both of which feature voice recognition technology to make driving and receiving directions easier and safer.

The 800 series is also said to feature FM transmitters, picture navigation (routing to a geo-coded point in JPEG files) and an automatic display of your last position - so that you can always find your way back to your car.

Garmin is also rumoured to be prepping the Garmin nüvi 500, which will boast a 5.2-inch 800 x 480 resolution TFT touchscreen. Details are sketchy at the moment, but it's been suggested that it doesn't feature a battery, making it likely to be integrated into your car.

Other rumoured specifications for the Garmin nüvi 500 include an FM transmitter, a 'Where Am I?' feature to find local points of interest and your exact latitude and longitude co-ordinates, automatic sorting of multiple destinations and automatic re-routing. It may also give you a choice of route set-up (faster time, shorter distance, off road etc), 3D map view and digital elevation maps, among other features. The suggested US price is $857 (£434).

We expect many of the features outlined here will eventually make their way into Garmin's equivalent UK devices. We'll let you know as soon as we have more details.