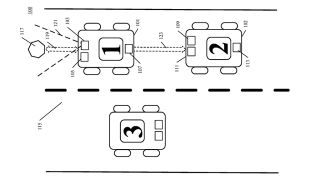 Cameras are a recent technology addition we've been seeing on more cars and soon they might start talking to each other if Motorola has its way.

In a new patent spotted by Phandroid, Motorola is looking to develop a camera system with various wireless technologies to watch the road for obstacles. Like other road monitoring systems

, Motorola's cameras would watch the pavement for obstacles for the driver to avoid.

However, instead of just alerting the driver in one car, the system would also ping nearby cars warning them of the same obstruction.

"In traffic, although such systems may provide warnings that a vehicle in front is getting too close, or is slowing down, such systems do not provide any information for obstructions that may be located one or more vehicles ahead and possibly around a curve in the road," the patent says.

The patent only describes how the system would work in a short brief without any explicit information on when or if it might come to four-wheelers.

But given the patent comes from a Google-owned company it might have something to do with the search company's recent push into cars. At CES Google announced it was integrating Android with cars.

Cars that can communicate with each other might be the perfect way of making them smarter. Additionally it could give more ways for drivers to communicate than just signal lights, and ahem, body language.

Alternatively Motorola might be looking at the technology to enhance the capabilities of the Google-owned Waze app. The app already allows users to send out reports of traffic jams, accidents, and other hazards on the road; so a smart, talking car might be able to file the same report on its own.

If we hear any more than patent pipe dreams you're sure to hear if from us, so stay tuned to this space.