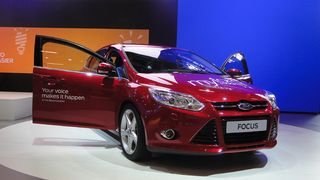 Launched at the IFA show in 2011, Ford has been slow to bring SYNC to the UK

Ford's SYNC platform has been available in the US for frankly donkey's. But this year it's finally bringing what is actually one of the most interesting and progressive in-car infotainment systems to the UK.

But is it any good? To find out, TechRadar got its sticky fingers on a SYNC-equipped Ford Focus.

What is Ford SYNC?

First up, SYNC as fitted to the latest Focus boasts a big 8-inch touchscreen. It's much larger than those found in most competing C-segment cars, such as the VW Golf or Vauxhall Astra.

In terms of both interface layout and core functionality, SYNC is based on a "four corners" structure, including connectivity, media playback, climate control and navigation.

For those of you who geek out to hardware specs, here's the dirt on SYNC. It sports a Freescale i.MX51 SOC with a single-core ARM Cortex A8 processor running at 600MHz. Then 512MB of RAM and 2GB of flash memory round out the hardware. As for background software, SYNC is built on Microsoft's Windows Automotive, which in turn is based on Windows CE. So now you know.

SYNC's interface looks slick and the touchscreen is swift and responsive. Admittedly, the SYNC screen is clearly lower resolution and the graphics aren't as polished as, for instance, BMW's market-leading iDrive system or the huge new 12-inch screen of the latest Lexus GS. But given the Focus's mainstream positioning, SYNC's visuals look best-in-class.

Ford has also put a big emphasis on voice control. With SYNC, you have pretty much comprehensive control of most parts of the interface. How much you'll actually use this feature is a different question.

As these things go, SYNC's voice control is fairly accurate. But we think voice control remains a feature that's useful for a few specific tasks rather than full in-car control, and SYNC is no different.

Is the navigation any good?

Being a car manufacturer, Ford is well aware that reinventing the wheel is a costly and futile endeavour. So, instead of building a navigation application from the ground-up, it partners with specialists NAVTEQ and TeleNav. The result is a pretty solid navigation interface that supports full 7-digit UK postcodes. Hurrah!

Given the wide ability of cheap portable navigation units with full postcode support, that might not sound like much of a feature. But lack of proper postcode support still plagues factory-fit sat nav systems. Ford has also partnered with ViaMichelin to provide SYNC's points-of-interest database.

What SYNC's navigation system doesn't offer, however, is internet connectivity. Consequently, traffic data is limited to the rather clunky radio-based RDS-TMC system and you don't get Google searches or send-to-car functionality.

Does it have internet connectivity and apps?

In fact, that lack of connectivity is a consistent theme for the Euro version of SYNC. At launch, media playback connectivity will include USB storage, Bluetooth streaming, smartphone syncing and CD spinning. The relevant partner here is Gracenote, supplier of a full music-tagging database, complete with album art. What you don't get, however, is any internet radio streaming.

In the US, SYNC has the Pandora internet radio app. With Pandora not available in the UK, it's obviously not part of the mix. Instead, Ford is working on a similar app based on Spotify. However, given the long gestation of SYNC for Europe, we're rather surprised Ford hasn't got Spotify lined up for launch. That said, it's clear that the SYNC platform is ready to offer apps such as Spotify as soon as Ford rolls them out.

In terms of internet connectivity, SYNC itself doesn't offer any. Instead, you can either plug in a USB 3G adaptor or hook up your smartphone. The advantages of this approach are twofold. Firstly, it means you don't need a separate cellular data account for your car. Secondly, it makes it easier to keep mobile internet access speeds up to date.

The key point here is that punters swap their smartphones for newer, snazzier models much more often than they change cars. Anyhow, at launch in Europe and indeed the UK, SYNC's internet functionality will be limited to providing a Wi-Fi hotspot.

On that subject, we were interested to learn that Ford uses SYNC's Wi-Fi connectivity to install software in cars during manufacture. Intriguing but irrelevant, you say? Not so. Ford plans to extend the use of Wi-Fi to enable owners to execute updates including app installations over Wi-Fi. Imagine parking your car in the garage and wirelessly loading the latest apps and you'll get the idea.

Do we rate Ford SYNC overall?

The success of SYNC will come down to two factors: cost and the speed with which Ford adds connected features. Sadly, we're still not clear regards the question of pricing. All we really have to go on is a commitment to make SYNC accessible to millions of mainstream car buyers. With that in mind, it had better undercut the often offensive prices car manufacturers charge for similar systems.

If it's dirt cheap – say, £300 to £400 – then SYNC will be attractive even at launch without any connected features. However, the market is moving fast and Ford would do well to add apps such as Spotify, along with features such as Google searching, send-to-car and social networking support (SYNC in the US already offers Twitter support), as soon as possible.

It's been a struggle for Ford to prep SYNC for European markets. But all the pieces are in place to make SYNC a properly competitive in-car platform.