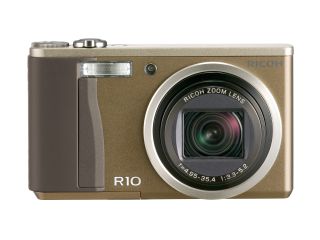 The Ricoh R10 in brown (in case you're colour blind)

Ricoh has announced a successor to its popular compact camera, the R8, and has bypassed the R9 altogether and called it the R10.

Featuring a rather nifty 7.1x optical wide-angle zoom lens (28-200mm in 35mm film equivalent focal length) and a 10MP sensor, the Ricoh H10 certainly has enough imaging power to match it with the big guns in the compact photography world.

Everything you shoot can be viewed on the camera's 3-inch, 460,000-pixel HVGA monitor, which features a digital level. So even if you've got one leg shorter than the other, images should be perfectly straight.

For those who haven't got much time to take their photographs, Ricoh has added a function button that can be customisable to your frequently used settings.

There is also a macro photography function, where you can get as close to the subject as 1cm at maximum wide angle and 25cm at maximum telephoto.

The Ricoh R10 is available in silver, black, and brown, and will be out mid-October, costing a very reasonable £199.99