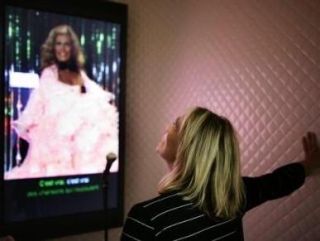 MySpace Karaoke: so good, you need a wall to hold you up

Bad singers rejoice! MySpace Karaoke has been given a makeover to make sure that it competes with the big guys, such as SingStar and Dave the karaoke man who seems to appear in pubs everywhere at Christmas.

The tweaks include making the website easier to use, improved upload capabilities and recording.

This means that people can now record themselves singing, with just four magical ingredients: a computer. a microphone. a web-camera and a connection to the web.

It's because of the recording part that MySpace Karaoke is not available in the UK, what with song copyrights and the like. This hasn't stopped the site from being incredibly successful, with the service garnering four million users.

According to MySpace general manager Nimrod Lev, this makes it "the largest karaoke venue in the world." A world that includes just America and Canada. A bit like the World Series, then – with the added bonus of Canada.