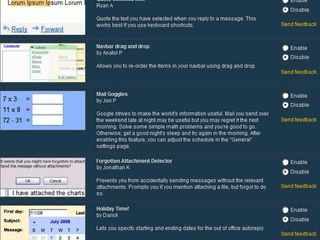 Will Mail Goggles be a life-saver?

Google's plan to make every aspect of our lives better is back in force with a service that will block you from sending drunken mail you'll later regret.

Users can activate a feature called Mail Goggles (like beer goggles, but with mail... you get the idea) and then will be forced to answer a series of mathematics questions when they try to go to Google mail. If they can get through them, they'll be deemed coherent enough to send the right message.

The default setting for the service is only to kick in on weekend nights, but Google is kind to all, including the raging alcoholics, so you can change it to all the time if you prefer (or if you just really like maths problems).

"Sometimes I send messages I shouldn't send," said Jon Perlow, a Gmail engineer who developed the program, in the Official Google Blog.

"Like the time I told that girl I had a crush on her over text message. Or the time I sent that late night email to my ex-girlfriend that we should get back together."

If your currently trying to get out of a date you set up in a whisky-filled fug last Friday, then head on over to Google Mail, hit 'Settings' then move onto 'Labs'.

It can't undo the mess you've got yourself into with weird Irma from that sticky club, but it can stop you doing it again...