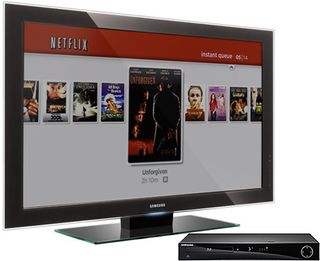 For those who thought the Ethernet connection on a Blu-ray player was just for Profile updates and ringtone downloads, think again.

Samsung is offering the capability of movie streaming to users of its BD-P2500 and BD-P2550 Blu-ray players.

The link-up comes courtesy of Netflix, who has struck a deal with the Blu-ray manufacturer to allow users access to the movie rental site.

All you need is an account with Netflix. Oh, and to live in the US, as Netflix annoyingly hasn't quite reached UK shores.

The movie-streaming update is free and, once downloaded, will allow instant access to many a movie.

Streaming technology is brand-new in Blu-ray circles, but is already in place for HDTVs, with recent Sony Bravia TVs equipped with something called Internet Video Link, which bypasses both DVD and Blu-ray and beams the latest movies straight to your TV set. Well, the latest movies released by Sony Pictures Home Entertainment.

Samsung is hoping that by incorporating the movie-streaming technology into its Blu-ray players will mean that consumers have the best of both worlds when it comes to movie watching.