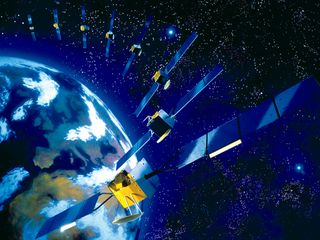 Free satellite TV will soon be available to all if the BBC gets it way. It has won provisional approval from the BBC Trust to launch Freesat, a new service offering up to 120 TV and radio channels. The move will prove a challenge to Sky who have a near monopoly when it comes digital satellite TV.

The Beeb plans to tie up with other free-to-air broadcasters like ITV and Channel 4 to provide channels and content on Freesat. The move is part of the BBC's commitment to provide digital TV to all UK households by 2012, the deadline date for analogue TV switch off.

Commenting on the plan, acting BBC Chairman Chitra Bharucha said: "For those seven million homes yet to make the switch, it needs to be clear that the benefits of digital television do not need to equal 'pay television'"

The BBC's Freesat proposal looks like a slap in the face for Sky's own Freesat From Sky which also offers 120 free-to-air channels for a one-off fee of £150. However the BBC's move is understandable when you consider that Sky doesn't exactly go out of its way to promote its free service, preferring potential customers to take out a pay TV subscription instead.

Things haven't been going Sky's way recently. It's current spat with Virgin Media has led to the withdrawal of some of its main channels from Virgin Media 's cable TV service, forcing Sky to lower its operating profit forecast by £15-£20 million. Its recently launched Sky Broadband internet service has also come in for criticism, with 14% of customers saying that they're very or fairly dissatisfied with it.