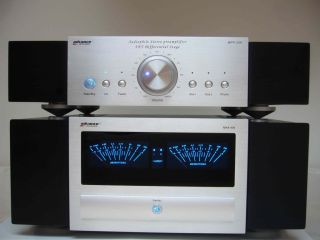 Advance Acoustic, the French hi-fi company who launched in the UK last year has announced details of a new high-powered, low cost amplifier. The MPP-206 preamp and MAA-406 stereo power amp is one of only two pairs of pre/power amps in the comprehensive Advance Acoustic range, which includes CD players, integrated amplifiers, tuners and speakers.

Watts in a name

The company, which has been in operation since the 1990s, claims the 150-watt pre/power has been "designed for music lovers and ‘audiophile connoisseurs’". It is said to include a number of high-level components, including FET and bipolar transistors, a massive toroidal transformer and high-precision metal film resistors.

The preamp features four line-level inputs, plus an integral MM/MC phono stage for vinyl enthusiasts. It boasts both balanced and unbalanced preamp outputs, plus both high pass and low pass filters, allowing the use of a subwoofer.

The power amp is capable of delivering 220 watts into a four-ohm load and weighs in at an incredible 20kg – four times that of the 5kg preamp. Users can get a look into how the amp is performing thanks to the illuminated dB/wattage display meters on the front panel.