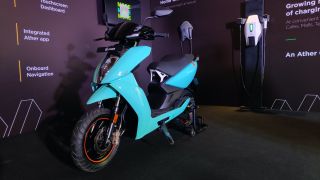 Ather Energy has taken the wraps-off the Ather 450X, after having teased it heavily for the past few weeks. The 450X replaces the 450 with new features, 4G connectivity, and a new ownership model.

With the Ather 450X, the company is also entering eight new cities, including Delhi NCR, Mumbai, Pune, and Hyderabad, apart from Bengaluru and Chennai. While the pre-orders are open for residents of all cities across India, the availability of the Ather 450X for Kochi, Coimbatore, Kolkata, Ahmedabad, Surat, Mysore, Goa, Bhubaneswar, Thiruvananthapuram, Vadodara, Nashik, and Jaipur are yet to be confirmed.

"With Ather 450, we wanted to build a vehicle that breaks the mold of what an EV can do in India. Over the last year and a half, the scooters on the road have provided tremendous data, and our online community is active with thousands of members," says Tarun Mehta, CEO, and co-founder of Ather Energy.

"With over 6 million KM of on-road data from our existing riders and the invaluable feedback from our community, we have built Ather 450X, which raises the bar on almost every key metric," he adds.

Ather has planned deliveries of pre-orders starting July 2020. However, the company first plans to equip the various cities with its second-generation fast charging Ather Grid points, and subsequently launch it.

Ather 450X is a critical step up from the previous generation scooter as it features a larger battery, has 4G network support, and comes in three colors-- Grey, Green, and White.

The electric scooter has an aluminum chassis with a 7-inch touchscreen dashboard that is powered by Qualcomm Snapdragon 212 quad-core processor and runs an open-source version of the Android OS by Google. The 450X weighs in at 108 kilograms, which are around 10 kg lower than the weight of the Ather 450.

Ather 450X has a 2.9kWh Lithium-ion, 21700 cell battery, which is an upgrade from the 18650 cell form factor that was used in previous models. Interestingly, Tesla also uses a 21700 cell battery type in its electric vehicles. With this new kind of power source, we can expect an increase in power and energy density while riding the 450X.

The 450X has an Indian Drive Cycle (IDC) range of 116 kilometers, which translates to a range of close to 85 kilometers while driving in a city. Having said that, the Ather 450 had a certified range of 107 kilometers when it launched in 2018, but many users could take it up to 130 kilometers on a single charge.

It has a top speed of 80kmph, a peak power of 6kW, and the maximum torque that can be achieved stands at 26 Nm. Ather has also revealed a new mode for the 450X, which they're calling the Warp Mode. In the Warp mode, the Ather 450X can go from 0-40 kmph in just 3.29 seconds and from 0-60 kmph in 6.50 seconds. This makes Ather 450X the fastest electric scooter in its segment.

Alongside the 450X, Ather also announced its second-generation fast-charging network, which is 50% faster than the previous generation. This new electric scooter also has a fast-charging solution that juices it up at the rate of 1.5 kilometers per minute, a step up from the 450. At homes, users can expect the Ather 450X to charge from 0% to 100% in 5 hours and 45 minutes.

The 450X supports 4G network connectivity and can be equipped with an e-SIM card along with support for WiFi. The scooter also supports Bluetooth connectivity that lets riders listen to music or manage calls on-the-go. To that extent, the company has also announced a smart helmet as an accessory that riders can use to control the music playback and calls.

Interestingly, the 450X has an additional tire pressure sensor that monitors the tires of the scooter and alerts the rider on the dashboard panel in case of low pressure.

The on-board screen is responsible for navigation, managing auto indicators, OTA updates among displaying other such real-time data. Riders can also view the ride statistics, real-time location and vehicle monitoring, theft-detection, voice assistant, and more from the Ather Mobile app.

Ather Energy also offers an unlimited warranty on the 450X's battery for a lifetime.

Ather revealed a new ownership model for the 450X apart from the regular purchase model. There are two variants dubbed as "performance packs" with the 450X-- Plus and Pro.

These work like any other subscription plan, wherein people can switch between either of the packs based on their particular use case. Therefore the Plus performance pack is a slightly toned-down version with the same top speed of 80 kmph. The 450X Plus can go from 0-40 kmph in 3.9 seconds, whereas the Pro can do it in 3.3 seconds.

You can check-out the Ather 450X in more detail and can pre-book one for yourself here.