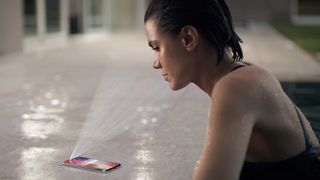 Apple's switch to facial recognition to unlock the iPhone X has been a controversial topic with children unlocking their parent's phones and masks fooling the tech.

Yet, Apple believes the tech can do a lot more than fingerprint scanners ever could. Phil Schiller - SVP of Worldwide Marketing at Apple - spoke to our sister site T3.com and said: "We knew what we created with the home button through the years. We knew it was no small thing to decide to replace that.

"We believed we could make something that most of everybody would love, and would have the potential to be far greater over time with where it could go."

Touch ID had it easy

He goes on to explain how the evolution of Touch ID has actually meant Face ID tech has had a harder job at the starting block.

Schiller said, "The home button, at the beginning, really did one thing. Maybe two. It woke up your screen, and then it let you go to the home screen from any app."

"Then over the years, we've layered on many, many uses – the multitasking capabilities, evoking Siri, you being able to use it for Apple Pay, creating Touch ID for your fingerprint.

What this hints at is more features for Face ID in the future, as Apple looks to fully utilize its facing scanning tech which, by the sounds of it, is in its first iteration.

The rest of the interview with Schiller tackles the topics of AirPods, Mac Pro 2018, augmented reality, iPad Pro, Apple Watch 3 and much, much more.