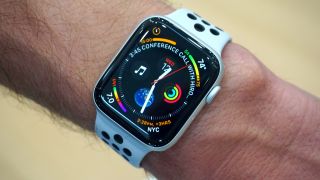 Apple has been granted a patent for a harmful gas detector that could one day end up in the company’s lineup of devices like iPhones, iPads and/or Apple Watches.

Given how lethal some gases are, like carbon monoxide (CO), it’s obvious why Apple would want to install a detector in its products – especially future Apple Watches, given how the company’s pitched the ECG-capable Apple Watch 4 as a suitable device for older health-conscious users.

The patent, per Patently Apple, describes a “miniature gas sensing device encased in an enclosure” In diagrams, this “enclosure” is alternately represented by a dummy iPhone and Apple Watch inside which one or more tiny gas sensors can be integrated.

The gas sensor would supposedly be able to detect more than just CO, per Patently Apple:

"Apple's patent claim #9 points to a "target gas comprising of at least one of ozone (O.sub.3), nitrogen dioxide (NO.sub.2), nitrogen monoxide (NO), sulfur dioxide (SO.sub.2), carbon monoxide (CO), methane (CH.sub.4), and volatile organic compounds (VOCs), and wherein the components of a gas mixture other than the target gas comprises poisoning species including siloxanes, sulfates, phosphates and chlorides, and/or interfering species such as water vapor."

There’s clear utility in packing an iPhone or Apple Watch with a gas detector, especially since these devices are frequently near or attached to users as they sleep. It could be challenging to fit devices with these sensors while still making them waterproof, since the gas sensor may need its own hole in each device, as 9to5Mac points out.

But these sensors could just as easily find their way into the HomePod or other domestic-focused products that Apple may design down the line.

In any case, the patent was filed “back in 3 2018” (presumably March 2018), according to Patently Apple. Who knows when this technology could enter Apple devices, or if it will.