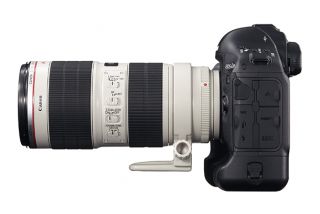 The Canon EOS-1D X Mark II replaces the EOS-1D X at the top of Canon's DSLR range and introduces a number of full-frame firsts to the EOS line - including 4K video, continuous autofocus for movie shooting and a high-res touchscreen.

But, head to head, how do EOS-1D X Mark II and Mark I compare? We've been through the spec sheets of both cameras with a fine-tooth comb in order to reveal the small details you may have missed, as well as the headline differences.

From resolution and continuous shooting speed to controls and battery life, here's how a detailed comparison of how the EOS-1D X Mark II shapes up versus the original EOS-1D X.

Those photographers who wanted a higher resolution EOS-1D were going to be disappointed: at 18.1MP the EOS-1D X featured a lower resolution sensor than the EOS-1Ds Mark III.

At 20.2MP, the EOS-1D X Mark II's CMOS sensor offers a modest increase in resolution over its predecessor's. This figure more or less matches the resolution of the 1DX Mark II's nearest rival, the 20.8MP Nikon D5.

At least Canon photographers needing a camera with a much higher resolution now have the option in the shape of the 50.6MP EOS 5DS/R.

The EOS-1D X Mark II's sensor also brings a couple of innovations to Canon's pro DSLR range - including Dual Pixel CMOS AF - which we cover further down this head to head.

So, when it comes to sensor resolution and image processing, it's pretty much what you'd expect with the EOS-1D X: a few more megapixels and a bump in processor spec.

Somewhat surprising, given Nikon's step up to 153 AF points with the Nikon D5, Canon is sticking with a total of 61 AF points, including 41 cross-type and 5 dual-type - in the Canon EOS-1D X's replacement.

But compared with the EOS-1D X, the EOS-1D X Mark II's AF array point array covers a larger area of the viewfinder. All 61 points are capable of f/8 autofocus, too; on the original EOS-1D X, only the centre AF point and the ones directly above, below and to each side offered autofocus with a lens with maximum aperture of f/8 attached.

This makes the EOS-1D X Mark II much more flexible when working with telephoto lenses and teleconverters combinations, where the maximum effective aperture can be pushed towards f/8. No longer will you be forced to lock focus with the centre AF point and recompose.

Talking of centre AF points, the EOS-1D X Mark II's is sensitive down to EV -3, versus the EOS-1D X's EV -2, making it more effective for low-light photography.

The EOS-1D X was no slouch in this regard, so it'll be interesting to see how much of an improvement this brings.

Canon has a reputation for building cameras that offer fast-focusing and fast continuous shooting speeds, and the Canon EOS-1D X Mark II will only enhance that.

Obviously there's little point in having such a rapid burst rate if the buffer clogs up too quickly. There's little worry of that happening with the EOS-1D X Mark II. It can shoot a continuous burst of 170 full-res RAW files, compared with the Mark I's 38 RAW files.

One of the reasons that the Canon EOS-1D X Mark II can shift files from the buffer at a faster rate than the Mark I version is that it has a CFast 2.0 card slot, alongside a regular CF card slot. It's the first EOS stills camera to be compatible with this new format.

CFast 2.0 currently has a write speed of up to 440MB/s, which is three times the rate of the fastest CompactFlash card (150 MB/s).

While it's easy to see the evolution in many areas between the Canon EOS-1D X and EOS-1D X Mark II, it's not so obvious in terms of ISO sensitivity - on paper, at least.

Both cameras share the same standard ISO range, from ISO 100-51,200, although the EOS-1D X Mark II goes 1 stop higher in the expanded sensitivity range, with a maximum ISO 409,600 equivalent.

What is perhaps more important to the EOS-1D X Mark II's target market - sports, press and wildlife photographers - is the new A/D converter that's been built into the sensor. This offers the potential for reduced image noise.

The pixel count's increased to approximately 360,000, with new integrated IR pixels that detect infrared light and reportedly improves the accuracy of both the EOS Scene Detection System and autofocus.

The dedicated metering processor's been upgraded from a DIGIC 4 to a DIGIC 6, too.