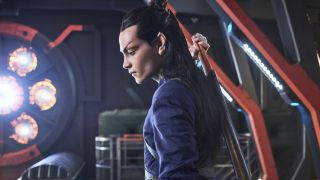 Star Trek: Picard has slowly pieced together its crew over the course of its first few episodes. In episode four, 'Absolute Candor', we met its newest member: the sword-wielding Elnor, a Romulan raised on the planet Vashti by the Qowat Milat, a group of warrior nuns. In a rash moment towards the end of the episode, Elnor beheads a man with the intention of saving Picard, a brutal outcome that JL isn't happy with. Nonetheless, it results in Elnor departing the planet with Picard, ready to follow him on the rest of his journey.

We spoke with actor Evan Evagora about Elnor's story in episode four, and what we can expect from the character for the rest of the season. "He gets into a fight with Picard, and he ends up beheading a man he's known since he was seven or eight years of age," Evagora says "He kills for the very first time in this episode, and we see him processing that sort of moment. We see him grow up a little bit, and we also see him finally leave the planet he's been stuck on for 10 or 12 years. He gets to finally take to the stars, and go on this amazing adventure, and see this world he's only ever heard about and dreamt about. He's finally on his path to becoming who he's meant to be."

The episode establishes that Picard has known Elnor since he was a young boy, so this is a drastic altering of their relationship. "They've got a bit of a rocky relationship. It's been some time since they've seen each other," Evagora says.

"Elnor's got a lot of questions for Picard: why he left him, I guess he feels very abandoned by him. And the thing about Elnor is, he's an orphan, and he views Picard as a father figure. What happens when that person up and leaves from your life, you know? He's dealing with all that, and then this man re-enters his life again, and we just pick up from that moment and deal with Elnor and Picard's reaction to that."

The Romulans are in a tough situation in Star Trek: Picard, having been displaced by the supernova first seen in 2009's JJ Abrams Star Trek film. Evagora believes Elnor offers a different perspective on Romulans than we're used to seeing in Trek. "He's very much affected by what's happened to his homeworld. With him, I found that even when I had to go back and do some research for the role, I found when I got given the script and spoke to the writers, especially Michael Chabon [Picard's showrunner], I found what I knew about Romulan culture I had to throw out the window. He shines a light and gives us a different perspective on Romulans than we've really ever seen before."

Star Trek: Picard is careful to depict Romulans with real depth in what are evidently politically turbulent times for the people. We've seen plenty of Laris and Zhaban this season, for example, both of which live with and are employed by Picard on his vineyard.

'Absolute Candor' ends with Elnor on-board La Sirena, ready to continue on with Picard in their search for Soji, Dahj's twin. We ask Evagora how Elnor will interact with the other crew members, given his very different background. "He's obviously a late addition to the ship, and everybody already has some form of a relationship, and this kid rocks up. It'll be interesting, the dynamic he has with all the other characters, though he's very much the same intrusive person especially when it comes to social interactions. It's kind of endearing at the same time as being annoying [laughs]."

Evagora won't be drawn on details of how his character develops in the rest of Picard season one, only that it won't be predictable. "You're going to have to wait and find out. It's not what you expect, though. I'm probably going to have to leave it at that."