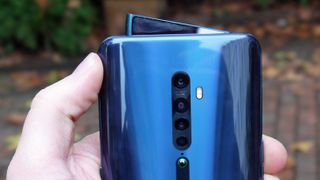 If you know the Oppo Reno series, you probably recognize the distinctive pop-up 'shark-fin' camera (as you can see in the image above). However it seems like the Oppo Reno 3 series is set to drop this stylish design quirk.

That's based on new images of the Oppo Reno 3 and Reno 3 Pro that have appeared on Oppo's Chinese website. Meanwhile, Oppo vice president Brian Shen has confirmed that there will be a 5G variant of the Reno 3, teasing an image of the front of the device, as well as a video showing the rear of the phone, on Twitter.

The images shared by Shen are labelled as showing the Reno 3 Pro 5G, but based on the Oppo Reno 5G and Reno 10x Zoom looking exactly the same, we'd expect the 5G device to be almost exactly the same as the non-5G Pro phone.

Other than the fact the Oppo Reno 3 would use a Snapdragon 765 chipset, we hadn't heard anything of the upcoming collection of phones before, but Oppo has constantly pledged itself to a 5G future, so it makes sense that the company is releasing another 5G device.

There's a lot to unpack from the teases, but the main takeaway is that the 'shark-fin' will be no more. Instead, the Oppo Reno 3 will have a small notch, and the Pro (and presumably the Pro 5G) will have a 'punch-hole' cut-out like the Samsung Galaxy S10.

The lack of the shark-fin robs the Oppo Reno series of arguably its most distinctive feature – not as many people would have noticed the Oppo Reno 10x Zoom or Reno 2 if they looked like standard Android devices, and the upcoming phones look a lot less distinctive as a result.

What is the Oppo Reno 3?

Other than the sad absence of the shark-fin pop-up section, there are a few things we can tell about the upcoming Oppo Reno 3 and Reno 3 Pro from the images.

A first look at OPPO Reno3 Pro 5G - it will feature a glass body with a thickness of just 7.7mm (excluding the lens), which may just be the thinnest dual-mode 5G phone in it’s price segment. 👀 pic.twitter.com/KD9goOTD6bNovember 28, 2019

The images of the Reno 3 5G Pro also show that the screen curves around the edges of the device – that's a first for an Oppo device, and it's a design feature that's usually reserved for high-end devices, whereas the Reno phones are typically more mid-range.

Shen's caption also states the thickness of the Pro 5G will be 7.7mm, and based on that it looks like this phone will likely have a huge screen – we'd estimate it at around 6.8 inches, or at the upper limit for modern smartphone displays.

A first look at the full rear side of OPPO Reno3 Pro 5G. Thoughts? 👀 pic.twitter.com/V8yknOzFofDecember 9, 2019

The new images also show us that the Reno 3 Pro and Pro 5G, and, but the looks of things, the Reno 3 Pro will have four rear cameras. That's the same number as the Reno 2, but we'd hope that some of the non-primary cameras were a little more powerful than on that device, as we found some of the snappers were distinctly underwhelming.

The camera array is at the top-left of the phone's rear now, not central and flush with the back of the device, as in previous Reno devices. The prior rear design was another distinctive feature of the Reno devices, and the new design looks a little more generic.

We've haven't yet heard about a launch date for the Oppo Reno 3 phones, but since we've seen this revealing look so far in advance of MWC 2020, it's possible that we'll see them before next year's mobile expo.