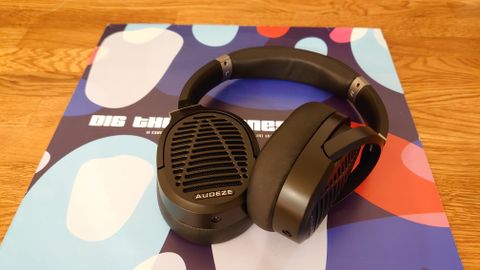 Audeze manages to bring its typically uncompromised and uncompromising technology down to a real-world(ish) price. As long as you are prepared to do your listening in splendid isolation, there’s just no reason to overlook these headphones.

There is something quite admirable about Audeze’s almost complete refusal to compromise. From the outset, the company has targeted both the professional market and the higher-end domestic consumer - and by using an alluring combination of planar magnetic technology, lavish materials and an unmistakable aesthetic, it has established a product range that’s been rapturously received.

So here, a mere dozen years or so after the whole Audeze journey kicked off with the LCD-2 planar magnetic on-ear headphones, is the LCD-1, the most affordable pair of headphones Audeze’s ever produced, despite sharing a number of similarities with headphones that cost twice as much.

But can these $399/£399 headphones rival audiophile cans that cost twice as much? The answer, of course, is an unabated and resounding yes.

It's worth starting off by saying that the LCD-1 isn’t a wireless design. In fact, it’s even more wired than most wired designs - there’s a hefty, nicely braided cable running from each earcup. It isn’t a noise-cancelling design, and it doesn’t have any touch controls (or remote control of any kind, in fact).

There’s 180 degrees of articulation in the earcups, though, and they fold quite flat in order to fit in their bundled travel case. And at 250g, they’re plenty light enough to be easily portable too. But despite this, and despite Audeze’s assertion that this is travel-friendly design, the LCD-1s are not closed-back - so while they might be easy to transport, you should think long and hard about using them during transit, because they leak sound from those open backs like a sonic colander.

It’s honestly difficult to envisage a scenario where usage on public transport (for example) couldn’t be quite easily considered ‘anti-social’.So let’s agree, then, that you’re going to use your LCD-1 for listening in private.

Thankfully, they’re as comfortable as any nominal rival, thanks to lambskin leather memory-foam earpads and inner headband (so long vegan listeners, it was nice while it lasted). The quality of the plastics used is reassuring, too.

Briefly, a planar magnetic design seeks to strike a balance between the more usual (compact, cost-efficient) dynamic drivers most commonly fitted in headphones and the (big, expensive) electrostatic drivers featured in some esoteric high-end designs. By using elements of each technology (the thin, flexible sound-producing membrane of electrostatic, but with a current flowing through it in the dynamic driver manner), Audeze is shooting for the best of both worlds. The speed, precision, low distortion and extended frequency range of electrostatic, but with the space- and cost-efficiency of dynamic.

The design features some patented (and extremely racing-sounding) Audeze technologies: ‘Uniforce’ diaphragms, ‘Fluxor’ magnets and ‘Fazor’ wave guides, all of which undoubtedly contribute to the LCD-1s’ performance despite sounding like rejected characters from a Marvel Origins movie.

Otherwise, there’s really only an absence of features to report. The two-meter anti-tangle braided cable is fitted with a 3.5mm jack and comes with a 6.3mm adapter. About two-thirds of the way along its length, it splits into two and joins each earcup via 3.5mm jacks. Because it’s detachable, it can be easily replaced.

And honestly, that’s your lot. So everything that’s going to justify the LCD-1s’ price-tag is going to have to happen in its sound performance.

It’s hard to know what’s most impressive about the way the LCD-1s sound. Is it the prodigious detail levels? Certainly a listen to the close-mic’d guitars-and-voice intimacy of David Olney’s Jerusalem Tomorrow lets the Audezes communicate the finest details of the singer’s voice - his lip- and palate-noises, his breath management, his phrasing and his unmistakable character. Some headphones make it sound like Olney’s accompanied by one guitar, but the LCD-1s make it obvious there are two: an electric and an acoustic, playing in such close formation that they almost sound double-tracked. But such is the insight on offer here, the differences in string-gauge, picking force and simple tonality are made absolutely explicit.

This forensic level of detail examination doesn’t render the LCD-1s dispassionate or forensic in any way, though. They revel in music for music’s sake, and just because they can deliver Anna Meredith’s Nautilus more cleanly, and with straighter edges into and out of individual sounds, more effectively than any similarly priced rival, that doesn’t make them prissy. Nor does their neutral tonality render them undemonstrative.

They’re similarly talented where scale and frequency extension are concerned. The Anna Meredith tune exists on a wide, tall soundstage, and when the recording tips decisively in favour of ‘attack’, the LCD-1s dig as deep and hit almost as hard as any dynamic-driver alternative. And they do so without undue stress, without skewing their overall frequency response and without any apparent effort. Wind the volume northwards (because you’re not around other people, obviously), and the LCD-1 simply gets louder. Its even-handedness and balance isn’t compromised in the slightest.

If ever a recording was designed to unsettle both the listener and the equipment serving it up, it’s Girl Band’s Shoulderblades. But while the LCD-1s don’t attempt to clean the dirt from under the song’s fingernails, nor try to disguise the stink of cigarettes hanging on its clothes, they are unflustered. The tempo is handled skillfully, the grimy analogue bass drone is deep and caustic, and the dynamic variances (both great and small) are described in full.

The LCD-1s’ overall presentation, no matter the material you’re listening to nor the volume at which you’re listening, is composed, engaging and entirely believable. Listen to music you’ve never heard before and you’ll never doubt you’re being given the full picture. Listen to music you’ve heard a thousand times before and there’s every chance the Audezes will find some nuance in there you’ve never really heard before.

Shortcomings are remarkably few. The open-backed arrangement puts a bit of a crimp in their usability, certainly, and it’s true to say that an extended listen (more than, say, an hour) can cause the leather-clad earcups to heat up somewhat. But as far as the nuts and bolts of audio reproduction are concerned, there’s really nothing of any note to take issue with here.

The most committed bass-heads will find alternatives that have even greater low-frequency potency, but nothing with the sort of sub-atomic detail levels the LCD-1s’ bass reproduction enjoys. The rest of us will just get on with delighting in the extraordinarily assured way the LCD-1 goes about making music.

The Audeze LCD-1 are so out of step with the current over-ear headphones market, it’s almost reason enough to enjoy them. But there’s such an obvious and instinctive correctness to the sound they make, in every respect, that the quirks in their specification turn out to be neither here nor there.

As long as you are prepared to do your listening in splendid isolation, there’s just no reason to overlook these headphones.