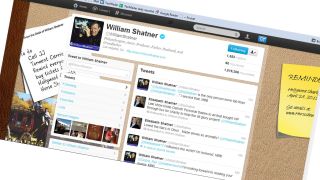 If that wasn't enough, there's William 'my best, Bill' Shatner and Apple's amazing ducking and diving over the fact that slapping a 4G moniker on the iPad and selling it in places that aren't 4G-ready is in no way breaking advertising standards. Enjoy…

Shatner's a tweet-heart – The original Captain Kirk was suave, debonair and. Loved. A good. Pause. The man behind the captain, Mr William Shatner, is proving he's exactly the same on Twitter, offering his millionth Twitter follower to (boldly) go to lunch with him. And they agreed! Troy Pound went on the date with his wife and there's video evidence of the whole encounter. Amazing. [Cnet]

No longer up – Revenge smut site IsAnyoneUp.com has finally gone down, with the closure of the site due to its owner, Hunter Moore, standing up against under-age bullying. According to Moore, he was receiving far too many pictures of under-age kids in the nude and this pushed him into closing a website that was coughing up $20,000 in advertising revenue. Considering Moore was callous enough to post pictures of people over the age of but without their consent, his knew-found morals are a little skewed but at least the outcome is a decent one. [BBC]

Plane crazy – A pilot had to abort the landing of his place back in 2010 because he had left his phone on in the cockpit and was distracted when someone texted him. Considering you are told approximately 5,321 times to turn your mobile phones off before take off, we're guessing he just didn't have his listening ears on. Or was too busy playing Flight Control. [Register]

Scientists love a good screw – Doctor Who fans rejoice, scientists have managed to create their very own sonic screwdriver. The device uses ultrasound but, before you put your order in for one, at the moment can merely lift rubber discs out of water. But small steps – soon it will be ready to take on the Daleks of the world. As long as they are a centimetre tall, made of rubber and immersed in water. [Tech Eye]

Tech Tony – Old-school Tony Blackburn fancies himself as the next Steve Jobs, telling journos that all the cool kids ask him to sort out their tech problems. Dig deeper and it turns out that he is into technology because he uses FaceTime a bit. But, Tony, if you are reading this we would love you to come and do a Tech Tony column for us. [Guardian]

Shuttle shutdown – The Space Shuttle Discovery has finally shuffled off of this mortal coil and retired. It did spend the final weeks of its life going around the US doing fly-bys before it left, which is kind of cool. And a bit like that scene in Top Gun, where Maverick makes the air traffic control person spill his coffee. Only with more space. [Verge]

The Sony will see you now – Sony is looking to add health monitors to its technology, so the next time you watch TV you can be embarrassed by just how much of a lazy sod you are being by lying on the couch and doing nothing. Kind of. [Sony]

It's not me, it's you – Apple has brazenly taken the Australian courts head-on when it comes to claims that it is falsely advertising its iPads as being speedier because they have 4G, by saying that Oz is branding its 3G networks wrong. You've got to admire how bullish it is being but surely it can't win this one? [AllThingsD]

iControl everything – A woman in the UK has managed to get an article in a broadsheet by telling them she controls everything in her house by either an iPhone or iPad. We stopped reading after she explained she has a 7-foot cinema screen in one of her many rooms. Yes, we're jealous – what you going to do about it? [The Telegraph]

Name that tune – A spin-off of Anonymous has arrived to take the music industry on and it's called AnonTune. No, it's not the catchiest moniker but considering the damage Anonymous continually does to big businesses we are sure EMI and the rest will be having a few sleepless nights because of the musical hacking collective. [SlashGear]