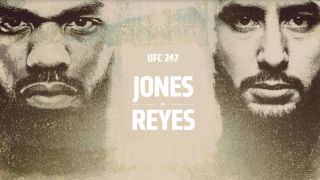 Two undefeated light heavyweight greats, a feared women’s flyweight champion and a heavyweight winner under threat of losing his belt - a UFC 247 live stream is looking like one that should not be missed.

UFC 247 will be kicking off tonight at the Toyota Center in Houston, Texas.

If you purely want to see the main card, the time to tune in is 10pm ET, 7pm PT and 3am GMT. For the prelims, you'll need to tune in at around 8pm ET, 5pm PT and for those in the UK 1am GMT.

ESPN+ is your place to watch in the US, you can find out more about US streaming and other country options below.

Obviously, the stand out fight here is the main event Jon Jones vs Dominick Reyes. Many are labelling this as a done fight, with the odds on Jones taking the win almost certain before the match begins.

While that seems like an unfair observation against Reyes, an undefeated fighter who KO’ed ex-champion Chris Weidman back in 2019, he is against a man with a slightly unbelievable UFC history.

Tune in to watch UFC 247 online and you’ll likely hear repeated commentary on Jones and his expected win. Currently sitting at a 25-1 record (his only loss being disqualification), Jones is the #1 pound-for-pound fighter in the UFC and holds multiple records in his weight class for the most title defences, most wins and longest winning streak.

While odds are not exactly in Reyes's favour, if he pulls off this win it will go down in history as one of the best MMA fights in history - more than enough reason to catch a UFC 247 live stream.

Need more reasons? Valentina Shevchenko. The women’s flyweight champion is powering her way through her division, quickly running out of worthy fighters and much like Reyes, Valentina’s competitor Katlyn Chookagian will be very hard pressed to pull out a win.

Ready to catch all of the action? Scroll down to find out everything you need to know about watching a UFC 247 live stream no matter where in the world you are.

Live stream UFC 247 from outside your country

If you're a big UFC fan trying to catch any of the action of the UFC 247 but aren't in the country to watch as it happens then you will likely find the coverage is geo-blocked. You can try using a VPN to change your IP address to a country where the fights are airing and watch this main card just as if you were back at home.

Virtual Private Networks are also handy if you're concerned about streaming safely on the web, thanks to the encryption they use to hide your details. And the best won't log your personal information, either. We've tested hundreds of VPNs and can recommend ExpressVPN as the very best VPN in the world.

That's because ExpressVPN (which also comes with a 30 day money back guarantee) has proved itself as giving super fast connections, watertight security and is just really, really easy to download and use. You can watch on many devices at once including Smart TVs, Fire TV Stick, PC, Mac, iPhone, Android phone, iPads, tablets etc, too.

Plus, if you sign up to a year of ExpressVPN, you'll get 3 months extra FREE and a rather tasty 49% off the usual monthly rate.

For any seasoned UFC viewers in the US, you'll likely know that ESPN+ has the exclusive rights to aaaaall of the UFC fights since last year. That means its your one place to watch UFC 247.

Your options for watching the event depend on whether or not you have already dived in and bought a subscription to ESPN+. If you have, then the obvious way to go is with a UFC Bundle, costing you $84.98. While that might sound like a lot, that is not just getting you the UFC 247 PPV, but you’ll get a year-long subscription to ESPN+ (that would normally cost $50 alone).

On top of being able to stream tonight's event. A subscription to ESPN+ also opens up access to over 20 exclusive live UFC Fight Nights, alongside original content including Dana White’s Contender Series, UFC Destined, and Ariel & The Bad Guy, plus classic fights, replays, and there’s also the perk of fewer adverts.

Those who have previously subscribed to ESPN+ will have to take a slightly different route. This will mean buying the PPV out right at a cost of $64.99.

You can tune in to watch all of the action including preliminary fights on Saturday, February 8 at 8pm ET / 5pm PT.

And don't worry if you want to grab the pay-per-view but are going to be outside the US when it's on. Just scroll down the page a little to discover how to use a VPN to watch a UFC 247 live stream from abroad.

BT Sport has the exclusive broadcast rights to UFC in the UK and Ireland. However, the good news for subscribers is that unlike some past UFC events, the card won’t be PPV, with all the action being shown at no extra cost on BT Sport 2.

As usual, the main card will start quite late/early in the UK at 3am so make sure you prepare accordingly. If that is a bit too late for you, don’t worry as BT Sport also offers a spoiler-free replay page which will allow you to watch the full UFC 247 card at your convenience. Want to watch all the MMA action again? Well you can as the network will replay the full event on BT Sport 2 beginning at 10pm on Sunday night.

For those who don’t mind losing sleep to catch all the action at UFC 247, BT Sport will also show a live stream of the other fights on its BT Sport app and on its website. And don't forget that you can now get BT Sport without a massive commitment, thanks to the £25 Monthly Pass.

If you're a BT Sport subscriber but find yourself outside the UK and want to tune in, it's easy to do with a handy tool – simply grab a VPN and follow the instructions above to live stream the action.

Catch a UFC 247 stream in Australia

For anyone over in Australia, the place to head for your UFC 247 live stream is Main Event. You'll have to fork out $54.95 to grab the PPV here but that gains you access to the entire event.

Coverage in Australia will begin on Sunday, February 9 at 2pm AEDT then will be replaying at 8pm and then every 6 hours from 6am, just in case you miss it on the night.

Fans based in New Zealand can catch this major MMA brawl over on Sky Arena. Similar to most other streaming platforms, you will have to pay for the PPV, costing $39.95.

The main card will kick off at 4pm but if you want to catch all of the action, early prelims start at 12.30pm. You can catch this main event at 4pm on the Sunday. However, Sky Arena does not include the prelims.

If you want to watch the entire event, you have two options. Either, you get a UFC Fight Pass. Or, you download a VPN and try and watch UFC 247 online from another countries streaming service.

UFC 247 card: Who is fighting tonight?

Two title fights - one in the light heavyweight division, one the women's flyweight - both featuring four fascinating fighters. Just the two headline fights alone makes the UFC 247 a worthy watch, add in all of the top-notch line ups below and its one not to miss.

Those who love a heavyweight dual for the ages will be here for Jones and Reyes, anyone keen to watch dominance in the flyweight division can't miss Valentina and Chookagian and then both of those fights will be followed by a wealth of talent.

Who are Jon Jones and Dominick Reyes?

If you have even the faintest interest in UFC you will have heard of Jon Jones. The pound-for-pound #1 fighter is a living legend and every fighter to go up against him is looking to dethrone him.

Known for his lethal elbows, devastating blows to the chest and overwhelming stature, he's a brick wall you'll struggle to break through. However, if someone is going to step up and beat him, it will be Reyes.

One of the best up and coming MMA fighters, Reyes is currently undefeated and quickly racking up wins. He's become known for his lightning fast kicks and massive knockouts, if he manages to catch Jones off his guard, it could be the fight of the decade, if not a life time.

Who is the favorite to win the Jones vs Reyes fight?

Jon Jones is looking like the favorite to win by every bookie out there and a pretty large majority of fans. Realistically, Reyes would have to pull out a bit of a miracle if Jones’ history is anything to go by.

What are the other highlights from UFC 247?

While the title fight is obviously going to be the most exciting part for most fans of the sport, there are a few other matches to get amped about.

Valentina Shevchenko has been dominating the women's flyweight division and many fans expect the same fate in her duel with Chookagian as Jon Jones with Reyes - a dominating win.

Valentina is a punishing fighter likely to dominate the entire match and if we're honest, unlikely to be beaten. Only Chookagian, her number 1 contender, stands a chance.

When did Jones and Reyes last step into the ring?

Jon Jones last entered the Octagon back in July, 2019. He beat out Thiago Santos in a round 5 decision. As for Reyes, he won two fights back in 2019, one in October and one in March. Most noticeably, Reyes took on popular fighter Chris Weidman winning by a first round knockout.

What does a UFC fan receive with their ESPN+ subscription?

Quite a lot as it happens - a subscription to ESPN+ opens up access to over 20 exclusive live UFC Fight Nights, alongside original content including Dana White’s Contender Series, UFC Destined, and Ariel & The Bad Guy, plus classic fights, replays, and there’s also the perk of fewer adverts.