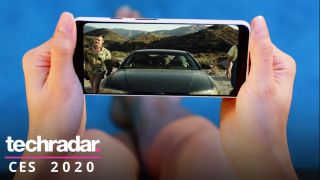 Quibi has been formally unveiled in a CES 2020 keynote, as its co-founders introduced the mobile-focused streaming service to the world. We already knew its release date of April 6, and two pricing tiers of $4.99 (around £4, AU$7) a month with ads and $7.99 (around £6, AU$12) without, but in the keynote we learned how its video is cleverly optimized for both portrait and landscape viewing.

It was also confirmed that the service is only coming to mobile, which makes sense when you see its content in action.

Jeffrey Katzenberg, formerly of Disney and Dreamworks, and Meg Whitman, former CEO of HP and eBay, explained their vision on-stage. Quibi's founders see their content as satisfying those "in-between" moments you'll encounter each day, like sitting patiently in a doctor's waiting room. They're making 5-10 minute episodes of shows designed to take advantage of all the features of mobile.

"We're not shrinking TV onto phones, we're creating something new," Whitman says. The service was introduced with a star-studded trailer, including appearances from Quibi's collaborators like Reese Witherspoon and director Guillermo Del Toro, which you can check out below:

Content on Quibi can make use of your phone's touch screen, GPS function, camera, gyroscope and clock.

"What it be like to watch a thriller that knows what time it is? Or a scary story that knows if the lights are out?" Whitman says. Steven Spielberg's pitch for a show called After Dark, that can only be watched at night, helped drive this approach to content. Creators and engineers collaborate on Quibi shows, and that's driven which features have been added to the platform.

Quibi literally stands for 'quick bites', and that approach to content, Katzenberg says, is inspired by mega-selling novel The Da Vinci Code by Dan Brown. That book is notable for having over 100 shorter chapters compared to other novels that have fewer, longer chapters (your enthusiasm for The Da Vinci Code may vary).

The ability to seamlessly watch content in portrait or landscape is referred to by Quibi as 'Turnstyle', and fullscreen is retained each time due to the way the shots have been composed. Here's an example of an ad that shows it in action:

That's not the only way Turnstyle can be used by creators, though. A more novel example comes with a thriller show called Nest. In landscape, it looks like any other TV show, but if you put it in portrait, you'll see what's on the character's own phone screen. It's gimmicky, but a potentially interesting storytelling idea, as you'll even see messages appear on the phone display as you watch.

That's not the only show that uses the phone's display for storytelling purposes. Another project, Wireless, is about a character who has to rely on his phone to survive, and this means you can flip your phone's perspective to read incoming messages that drive the plot forwards, or look at the fictional character's Instagram app, or simply see the character's expressions from the phone's perspective. A special three-phone tripod was built to film these segments.

These are just a couple of the 175 shows in the works. Big names like Sam Raimi, Kevin Hart, Ariana Grande and Idris Elba are working on content for Quibi, and it's got partnerships in the works with outlets like the BBC and TMZ.

Its daily content will encompass one chapter of a movie, five episodes of its TV shows, and 25 'daily essentials', including news and sports highlights segments. Quibi has raised an additional $400 million of investment to spend on new content and marketing, on top of $1 billion that had previously been invested in the platform.

It's aiming for 20 million users across the next five years, according to FT. The service is initially just launching in the US on 6 April, with other English language countries planned for 2020, according to THR.

It's true that entertainment is still bound by the laws of broadcast TV, to a large extent. The accepted norm of sitcoms being about 30 minutes long and dramas about an hour long is still the case for a lot of the shows on Netflix and Amazon Prime, even if variable runtimes are permitted on those services.

Will audiences always want to watch TV that's of this length? Quibi has its eyes on a future where they don't, and it's not hard to see why. Compare the slow-paced dramas that dominate modern TV to the shorter form internet video we watch, and it's easy to see how traditional entertainment might begin to change around our viewing habits.

Will it take off? Streaming video to your phone is not a new phenomenon, but expensive programming made specifically for that format by big Hollywood names is new. Katzenberg made the point in his keynote that 18-44 year-olds watch more video on mobile than ever now, but a lot of that content - Instagram, YouTube, TikTok - is free. Quibi is still a streaming service that demands a monthly fee.

It's launching, too, in a year that'll bring at least two other streaming services into the US market, HBO Max and Peacock. People might view the content offering on Quibi as different, but ultimately people will have a limit on how much they want to spend on internet video.