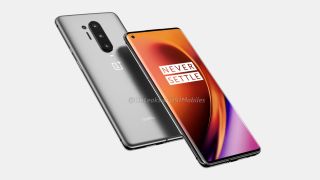 The OnePlus 7 Pro was one of the first mainstream flagships to cross the 60Hz threshold for smartphones. A new report states that the next OnePlus device will take it up a notch.

Save for a few gaming smartphones, most devices before 2019 came with a 60Hz display. That changed when the OnePlus 7 Pro was unveiled in May, with a 90Hz display, and even went on to top DisplayMate’s charts for the best screen on a smartphone. New rumors suggest that OnePlus is not settling at 90Hz for its future devices.

Industrial Leakster Max J. shared an image that mentioned “120Hz” with the caption “Be a Pro.” He further replied that this cryptic message was indeed for a future OnePlus device. Battery and performance implications aside, this will definitely make the OnePlus 8 Pro one of the smoothest phones around.

For context, only the ASUS ROG Phone II has a 120Hz refresh rate on an AMOLED display, and its color accuracy is nowhere close to that of the OnePlus 7 Pro. If OnePlus is indeed looking to make the leap to 120Hz, it will have to take care of this common complaint.

This news does not come as a surprise, as OnePlus spokespersons did mention that they will look to “cross 90Hz in the future” and “90Hz will be a standard on all OnePlus phones going forward.” Assuming that the company continues to follow a dual flagship strategy, we expect the OnePlus 8 to sport a 90Hz display, and the 8 Pro to touch 120Hz.

While the next OnePlus flagships are still a few months away, OnLeaks was able to share renders of the purported OnePlus 8 Pro, which had a design very similar to the 7 Pro with a big curved display, but opted for a punch-hole camera instead of a pop-up.

The same renders also suggest that the OnePlus 8 Pro will add a fourth camera to the back, likely to be a ToF depth sensor for faster focusing and better portraits.