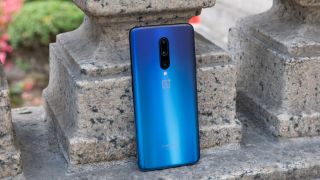 This information comes from the website RootMyGalaxy, courtesy of leaker @Thedroidleaks, who provides a render of the phone as well as a small specs sheet with a few points of interest.

It's worth pointing out that neither of these sources has a proven track record with leaks, so we're taking the information with a huge grain of salt. Saying that, the render does match up to what we've seen before, so we're accepting it enough to report on the information.

So let's get on to what this information tells us.

All quiet on the OnePlus front

There isn't a whole lot of information in this new leak, and in terms of camera specs, screen resolution, and features, for example, all is quiet, but some of this new information is intriguing.

For example, apparently the OnePlus 8 Pro's screen size will be 6.5 inches, making it smaller than the OnePlus 7 Pro or OnePlus 7T Pro, both of which have a 6.67-inch display.

It seems curious that the phone would be smaller than its predecessors, especially when there's a base device (presumably smaller still) and then a rumored 'Lite' version too, which would presumably be smaller again.

OnePlus 8 Pro Renders for https://t.co/OfsJb0oNYh (New render surfaces of the OnePlus 8 Pro revealing some of the key specs) > pic.twitter.com/Hycg2f8AJlFebruary 8, 2020

Also, there's said to be 8GB of RAM, which is middling compared to the 8GB and 12GB versions you could get with the OnePlus 7T Pro. The 12GB of RAM was in the McLaren Edition phone though, so the standard 7T Pro had the same 8GB of RAM.

But since other phone companies are starting to push into even 16GB at this point, 8GB of RAM feels a little on the low side.

Battery capacity is said to be up on previous devices, with the leak suggesting the OnePlus 8 Pro has a 4,500mAh power pack. That's higher than the 4,085mAh of the OnePlus 7T Pro, and should see the device ticking along for a long time.

The leak backs up previous suggestions that the OnePlus 8 Pro will have a 120Hz refresh rate screen, and at this point all leaks (and some information from the company itself) is pointing towards that.

All in all this leak points to a few upgrades and a few downgrades for the OnePlus 8 Pro, which is one of the reasons it seems a bit questionable – we can't fathom why the newer device would have a smaller screen than its predecessors.

We'll likely find out more about the OnePlus 8 series around May 2020, when we're expecting the devices to launch, but stay tuned to TechRadar before then for all the latest news and leaks.