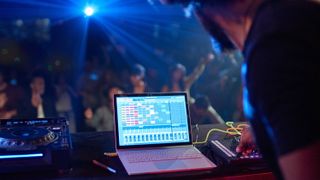 The Surface Book 3 could come with a radical new design that incorporates a detachable keyboard with a panel on the back that could be used for sketching and note taking with a stylus.

The potential new design comes from a patent filing (spotted by Windows Latest), which is titled “Computing device with detachable writing input device” (catchy), and shows a computer that looks similar to the Surface Book with a detachable keyboard.

What sets it apart from previous Surface Book models is that next to the trackpad, beneath the keyboard, there is a small space for using a stylus to jot down notes.

More interestingly, when the detachable keyboard is flipped over, the back becomes a large 'writing surface”, which the user can use to write down notes or perhaps use it as a graphics tablet for hand drawing and sketching.

This could make the Surface Book 3 (or whatever upcoming device Microsoft is thinking of including this feature with) a very useful tool for artists and graphic designers, as well as anyone who prefers writing out notes by hand.

If this new detachable keyboard is indeed coming to the Surface Book 3, or similar device, then it could represent a welcome return to the design innovation that we felt recent Surface products have lacked.

The recently-released Surface Pro 7 and Surface Laptop 3, for example, were two devices that offered only minor upgrades compared to their predecessors, while playing it very safe when it came to design.

By taking a more radical approach to the Surface Book 3’s design, Microsoft could end up with a much more exciting device.

A few words of caution before you get too excited, though. First of all, while the Surface Book 3 is likely to happen at some point (we’d guess a 2020 release date), Microsoft has not officially announced it.

Secondly, this is just a patent, and many patents never actually end up as finished products. If the Surface Book 3 is coming, there’s no guarantee that it will feature the new detachable keyboard.

Still, we live in hope that Microsoft has taken on board the criticisms its latest round of Surface devices got, and is planning some big changes when it comes to the designs of its flagship products.

If it doesn’t, it might find enthusiasm for its Surface devices beginning to seriously wane.