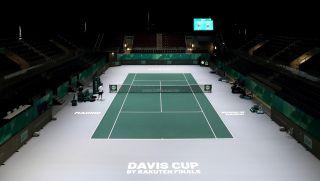 The Davis Cup is back - and looking completely different to how you've seen it before. With a brand new format, the 2019 tennis extravaganza marks the biggest revamp of the international team tennis tournament in its 119-year history. We've compiled this handy guide for watching a Davis Cup live stream on TV, online or on mobile, no matter where you are in the world.

With a host of big name stars set to play, the first instalment of the spruced up tournament looks set to be a hotly contested affair.

The 2019 Davis Cup finals is taking place on the indoor hard courts of the Caja Magica in Madrid from November 18-24.

The opening day's play is set to take at 4PM CET local time following the opening ceremony, with each day's play for the rest of the week set to commence at 11am. The grand final itself is set to start at 4pm CET on the Sunday.

Led by Rafael Nadal, Spain are currently installed by the bookies as favourites, followed by France who will be fielding a team boasting the likes of Gael Monfils, Benoit Pair and Jo-Wilfried Tsonga.

The A-list field will also see Novak Djokovic turn out for Serbia, while Great Britain's hopes will be resting on Andy Murray following his return from long-term injury.

It's set to be an exhilarating week of action, so make sure you don't miss any of the tennis by following our 2019 Davis Cup live stream guide below.

Live stream the Davis Cup with the official player

Alongside traditional sports broadcasters who will be showing the tournament (we've listed below for each region), its also worth noting that you can also watch the action online with a subscription to the official Davis Cup online player. It costs €4.99 to watch one specific tie, and €7.99 to watch every match from a specific round. There's also a €39.99 yearly subscription which will let you watch every Davis Cup and Fed Cup match over the next 12 months.

There will be no access to the Davis Cup player in any of Germany, Austria, Switzerland, France or Japan.

Live stream the 2019 Davis Cup tennis from outside your country

The best way to clear this net is to download and install a VPN (click the link if you're a bit unsure of what that is). We've tested all of the major VPN services and we rate ExpressVPN as the absolute best . It's compatible with loads of devices (e.g. Amazon Fire TV Stick, Apple TV, Xbox and PS4) and streaming services, ranks amongst the fastest and most secure, and even has an available 30-day money back guarantee so that you can effectively try before you buy.

So that's game, set and match for ExpressVPN. And if it comes to a tiebreaker, it's also worth noting that if you sign up for an annual plan then you also get 49% off and 3 months extra absolutely FREE.

How to watch the 2019 Davis Cup: US live stream

In the US, coverage from Madrid comes courtesy of Fox Sports, who will be broadcasting all of Team USA's games on Fox Sports 2.

Tournament sponsor and movie streaming service Rakuten will also be showing coverage via its app which is available for phones, PCs and some compatible smart TVs.

Assuming you have cable, you'll be able to watch Fox's coverage either at home, online or on the network's Fox Go app for tablets and smartphones.

And if you're a cord cutter that wants to catch the tennis without signing up to a lengthy, expensive plan, you could always try one of these sports streaming sites. They all have free trials going for them, too:

How to live stream Davis Cup tennis in the UK:

Eurosport will show exclusive coverage of the tournament on their channels and online player.

If you don't have access to Sky or Virgin Media, then you might want to consider Eurosport Player which allows you to stream the service via mobile, PC and some smart TVs. It’s £6.99 per month or £39.99 a year.

Not in the UK but still want to watch the tennis on your Prime account. Then you best option is to download and install a VPN and then log in to a UK IP address.

How to live stream Davis Cup tennis in Australia for free

The great news for Australian tennis fans is that they'll be able to view their team’s quest for a first Davis Cup title in 16 years on the free-to-air Nine Network.

You can also live stream the matches on the Nine Network's free 9Now web platform. The 9Now app is available to download for both iOS and Android devices from their respective app stores.

For all the other matches, you'll need a subscription to beIN Sports. That's free to do if you already have Foxtel while taking advantage of its FREE two week trial means you can watch the whole tournament for free before the $19.99 per month subscription kicks in.

The alternative is grabbing a Kayo Sports Basic Package costing $25 per month and allows users to stream across two devices simultaneously. But again, this won't include any games featuring Australia.

Outside Australia for the tennis? For those wanting to watch the Channel Nine coverage when you're overseas, you'll need to go down the VPN route as above.

The best way to stream the Davis Cup 2019 in Canada

Canadians will get all the Davis Cup final action live thanks to a broadcast from Sportsnet and TVA.

Eighteen teams will take part in the week-long finals which will this year take place in Madrid. Those teams are made up of 12 winners from February's qualifying round, the four semi-finalists of the previous edition and two wild card teams. This year Great Britain have been given a wildcard along with Argentina.

The eighteen teams are divided into six groups of three for a pool stage, with the winners each group and the best two second-placed teams advancing to the knockout phases.

Each match will be in a best of three format, with two singles matches followed by a doubles match.