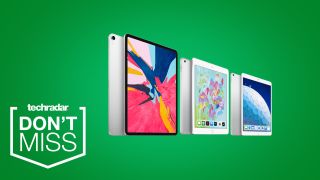 If you're shopping for last-minute Christmas iPad deals this holiday season, we've got all the best iPad Pro, Mini, and Air savings there are right here. These are the cheapest you'll find these excellent iPad deals around the US and UK right now, so if you're in a pinch you can quickly find the biggest saving on the best model for you.

iPad Pro deals, in particular, have seen extra price cuts as we round the corner before Christmas, meaning you can pick up hefty 12.9-inch and 11-inch models for even less right now. As ever during the holiday season, there are plenty other iPad Air and Mini deals to take stock of, if you're after something with a smaller price tag.

If you're looking for the cheapest iPad deal possible, you'll likely be looking at lower storage items. Thanks to iCloud, the 32GB and 64GB storage options available are more than workable if you're looking to stream your entertainment and keep you larger files in the cloud. That said, if you're looking for a tablet to potentially replace your laptop, or if you're going to be running several high-performance apps for some hardcore work, you might want to take a look at some of the roomier options.

iPad (2019) WiFi 32GB | $279.99 at Best Buy
This is the latest flagship iPad to hit store shelves. You're getting support for all the latest peripherals in this exceedingly cheap iPad deal today, plus a $50 price drop at Best Buy. 32GB is the smallest version available, so if you go for this model expect to be using iCloud a lot more than usual.
View Deal

iPad Pro 10.5-inch (2017) WiFi 64GB - Rose Gold | $537 at Newegg
Save over $100 on the cheapest iPad Pro you can buy right now. At 64GB you'll be stretching this iPad's storage if you want to use it for anything other than light work and entertainment, so you might want to consider the extra spend on the 256GB model. You can get this model even cheaper renewed, with the 256GB version coming in at $408.
View Deal

iPad Air (2019) WiFi 64GB| $469 at Walmart
The iPad Air takes all the best bits of the classic iPad experience and offers a new lightweight model to get it done with. This is the 64GB model and the cheapest configuration you'll find this week. While that storage capacity may work for you, if you're using your new iPad Air deal for simple entertainment or apps, it should be noted that heavier work may require more storage.
View Deal

iPad Mini (2019) WiFi 64GB | £379 at AO
If you're looking for an iPad Mini deal, this Currys price cut can save you a few pennies in the run up to Christmas. It's the best price you'll find for the fifth-generation iPad Mini right now, but for only £100 more you can double your storage with this 256GB model for £481.
View Deal

iPad Air 10.5-inch (2019) WiFi 64GB | £448 at Currys
The 2019 iPad Air model offers a power upgrade from the flagship range but doesn't quite reach the lofty heights of the Pro - it's a good middle point if you're planning on using your iPad for both work and play. Currys has cut the price on their 64GB and 256GB models.
View Deal

iPad Pro 11-inch WiFi 256GB | £849 at Currys
This iPad Pro deal from Currys not only offers one of the latest Pro models for less, but it's also an excellent way to grab a 2019 iPad Pro deal with a great 256GB of storage. You'll be able to store a good few high-performance apps as well as a fair number of HD downloads with 256GB. To save more cash, you can pick up this 64GB model for just £699.
View Deal

Which iPad deal should I buy?

There are enough iPad models to choose from now that making that decision can sometimes be more trouble than actually finding a great iPad deal. There are distinct use cases for each iPad model, however, so finding the perfect tablet for you is easy once you know what each one can do.

The iPad Pro is the most expensive version of the iPad you can buy, with the power and storage ranges reflecting that price point in today's iPad Pro deals. If you're looking for a high-performance tablet that you can use as a secondary device to your laptop, or even to replace your laptop entirely, we'd recommend an iPad Pro model with at least 256GB of SSD storage. That said the Pro is an exceedingly powerful tool for entertainment and lighter tasks, so if you want the luxury feel of Apple's most powerful tablet yet at a steep reduction in price, there are plenty of 64GB models out there as well.

The iPad Air sits between the flagship iPad model and the iPad Pro. A larger display design featuring the A12 Bionic chip gears this iPad more towards multi-tasking and word processing than the cheaper model, but the price point itself is easily justifiable if you're looking for a high-end entertainment device in these iPad Air deals.

The flagship iPad often runs the cheapest at this time of year, and 2019's instalment is no different. This year's iPad offers an experience more akin to the professional side of Apple's tablet customers, but still holds onto the price tag of a primarily entertainment device. It now has support for Apple Pencil and Apple's Smart Keyboard, but is also available in small 32GB configurations if you're really looking to spend as little as possible.

These iPad Mini deals are perfect for those looking for as little real estate in their tablet as possible. Perfect for popping into a small bag for computing on the go, the Mini sacrifices some of the more powerful components of other models to keep its portability.

If the model you're looking for has since dropped out of the seasonal sales, there's always our roundup of the best cheap iPad deals going to keep your eye on. While you're restocking your Apple products, you might also be interested in the best AirPods prices around. There are still plenty of MacBook deals to keep an eye on as well!