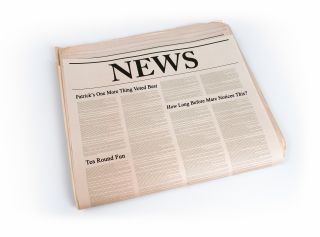 Today's One More Thing is chock-full of hacking scandals, apps that are proving popular and one of the best competition prizes ever given away in the history of the world. Ever.

And if that hasn't enticed you enough, we have also sprinkled a hidden message into this article. Find that and you will win the gift of magic… well, only if you class smugness as magic. And in a way, it is.

LulzSex – Hackers have once again infiltrated the seedier side of the internet and managed to reveal to the world the membership of Digital Playground. While the name Digital Playground evokes a place that's safe for kids to hang out and have digital fun in, it's really not – it's full of filth and everyone who has signed up to view said filth will be more than a little angry that their names and credit card numbers are now out in the wild. [Physorg]

Under the weather – Like us you will have looked at your iPad recently and thought to yourself: 'I really wish the weather app was better'. Well, never fear as one of IBM's supercomputers has been tasked to power the best weather app ever seen in the world ever. Or something. We are hoping it is powerful enough to make the sun shine on a rainy day but we fear our hopes for this will just slip, slip away with its eventually release. [Gizmodo UK]

It's a me, Mario - Nate Stehley is the luckiest man alive today, after winning a real-life Mario Kart in a GameStop contest – which was part of the company's epic rewards giveaway. The bad news is that he also won Donkey Kong and now has to house the massive ape in his garage. [techeblog]

Germany's going for a song – Spotify is now released in Germany, which is great news for those who live in the country and want David Hasselhoff's Looking For Freedom on repeat. [Spotify]

iPads for pussies – A new iPad app has been shown off which is being touted as the first interspecies game of its kind. Personally, we think the platypus is the result of an interspecies game so we can't say we are that convinced. But this one allows you to play a game on your iPad with your cat. Yup, it gave us serious paws for thought too. [Buzzfeed]

Link building – Megaupload founder Kim Dotcom is reportedly helping the US government to download their personal files from the site. Yes, many people in the US government used Megaupload for actually storing files. Maybe somebody should have thought of this before going in all guns a-blazing and shutting the site down forever. [Gizmodo]

Odd cover - Samsung has decided that what the world needs is a phone case that changes with our mood. Personally this sounds like the worst idea ever so if it does ever appear TechRadar's mood will always be angry, with more than a hint of melancholia. [Ubergizmo]

DARTH DRAWING: That is definitely a lightsaber he is holding. Definitely...

Easy on the movie watching – Netflix users aren't fans of Facebook sharing, according to a new report, with 71 per cent of them not giving a monkey's about what films are watched by their mates. There are two per cent of users that are extremely interested in what you watch though, but if you meet them you should back away slowly and shout as loud as you can for help. [All Things Digital]

Reach for the stars – Nasa wants your help in making space exploration that bit better by calling on hackers and coders to get together 21-22 April and make space-age apps. Yes, this could well be a precursor to a real-life 2001: A Space Odyssey. So be afraid. Be very afraid. [Sophos]

Bonus video time! - Your bonus video of the day is our Nokia 808 Pureview vs Lumia 900 ditty. Enjoy, it's a good one.