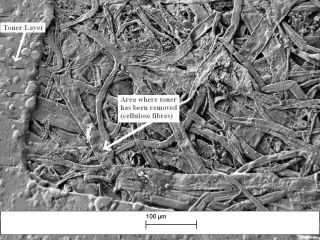 After removal: the tech in action

Cambridge scientists have invented a hand-held laser device that removes printer toner from old documents so the paper can be re-used.

Yep, you heard us - the barely believable tech removes the print without causing significant damage, so the paper can be reused right away.

The University worked on the study with the intriguingly-named Bavarian Laser Centre. Together the Anglo-German boffins tested a total of 10 laser setups of various strength and duration to find the best result.

Once the paper was subjected to the laser, the samples were then analysed by a scanning electron microscope for signs of damage and remaining toner.

The technology is currently hand-held only, but there's potential to make a printer-style office machine that can remove toner.

Dr Julian Allwood, head of the Low Carbon Materials Processing Group at the University of Cambridge, says his team tested a variety of lasers. "What we need to do now is find someone to build a prototype. Thanks to hand-held scanners and laser-jet printers, the feasibility for reusing paper in the office is there."

Along with saving forests from being used for new paper, the re-use rather than recycling of paper would save an additional 20 per cent in emissions according to the University.

In case you really want to know, the paper used in the experiments was standard Canon copy paper with HP Laserjet black toner.