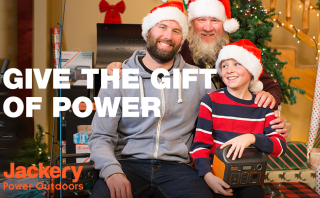 Today only, thanks to Amazon’s Deal of the Day, you can save up to 30% on the purchase of select Jackery products, including the Portable Power Station Explorer 240 and the SolarSaga 60W Solar Panel. This one-day sale drops the two products down to just $174.99 and $125.99, respectively.

You may be wondering who these products are designed for, as they are not ultra-portable and won’t fit in your to-go bag, but there are lots of use cases which make these a perfect holiday gift. If you know someone who loves to go fishing, camping, or spends long days at the race track or lives in an RV, the Power Station Explorer 240 is the perfect gift for them.

Instead of having a loud, gas-powered generator around, they can have a quiet, eco-friendly option that can easily be recharged using the also-discounted solar panels in just seven hours. This is the highest, and best-reviewed option that’s available at Amazon currently. With nearly 850 ratings, the Explorer 240 maintains an impressive 4.8 out of 5-star rating.

In addition to using it outdoors, the Power Station is also a great piece of gear to have around if you live in an area that’s frequently hit by storms that can knock out the power. It’s powerful enough to charge your basics, like phones and tablets, as well as power up fans, computers, and even your television for short periods of time. The Power Station 240 has two USB outputs, along with a 110V, 200W AC port and a DC port. There’s a single input for charging it from a wall as well. You can control the power to each of these independently, which is great in case you anticipate extended periods of no power and want to maximize the output of the charger. You can easily see at a glance how much power is left thanks to the on-device display, and monitor the output by seeing how many watts are being drawn at any time.

The solar panel can be used in conjunction with the Power Station that’s on sale, or on its own. It features a folding design that weighs in at just over three pounds and has a built-in handle for taking it with you on the go. When you aren’t using it with the Power Station, you can add a USB connector that gives you one USB-A and one USB-C output for charging phones, tablets, and other small electronics.

As previously mentioned, these are perfect gifts for anyone in your life that enjoys spending time outside. With the holidays right around the corner, odds are you have someone on your list who you don’t know what to get because they already have everything, and this could be the perfect option for them. You can grab either one of these individually for a gift, or go all out for someone and combine the two of them to give the gift of clean, off-grid power that can be used from anywhere.

Besides the two items that are on sale today, Jackery also sells a variety of other pocket-sized portable batteries, as well as larger and smaller capacity Power Stations and solar panels. Some of them have smaller discounts available at Amazon right now as well.

Keep in mind that the discounts above are available for today, December 14, only so don’t miss out.