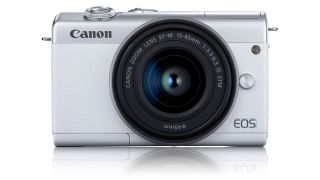 Canon has debuted the follow-up to the two-year-old entry-level EOS M100 APS-C mirrorless camera, adding some much-needed improvements to the brand-new EOS M200.

Also aimed at beginners or those looking to step up from smartphone photography, the M200 is almost physically identical to its predecessor but there are some major differences under the hood.

While the resolution stays the same, there's a very slight change in effective pixel count, with the M200 coming in at 24.1MP (while the M100 has a 24.2MP sensor), indicating there's a brand new sensor under the hood.

Alongside the new sensor sits Canon's latest Digic 8 image processor, taking over the Digic 7 in the M100. This latest engine adds 4K video recording capabilities to the M200 with a maximum frame rate of 30fps. However, recording at 4K comes with a 1.6x crop factor. HD videos can be shot at up to 120fps for a 4x slow-motion effect. There's also support for vertical video capture.

The new imaging engine and sensor pairing is also what allows the M200 to boast a better autofocus system than its predecessor. Where the M100 had a 49-point phase -detect AF system, the new snapper arrives with a generous 143 points, with eye detection AF also on offer.

In terms of design, the M200 looks very much like it predecessor. There's still no viewfinder – instead you'll be using a flip-up touchscreen display that's perfect for selfies. There's no mode dial on the shoulder, so most settings will need to be changed via the touchscreen.

That said, the Wi-Fi button from the rear of the M100 has disappeared from the M200, with the movie record button (which was on the top of the M100) taking its place instead.

Besides that, both Wi-Fi and Bluetooth are available on board for easy sharing of images, as are Canon's Creative Assist modes for learning new skills. There's also the Self Portrait mode, important for a camera aimed at taking selfies.

Although the changes to the M100 seem like an incremental update, the M200 is aimed at entry-level users and could shape up to be one of the best APS-C mirrorless cameras for beginners, especially given its very friendly price tag of $549/£499 with the 15-45mm kit lens.

The new camera goes on sale in most markets in October, although Canon Australia has no plans of bringing the M200 Down Under at this point.