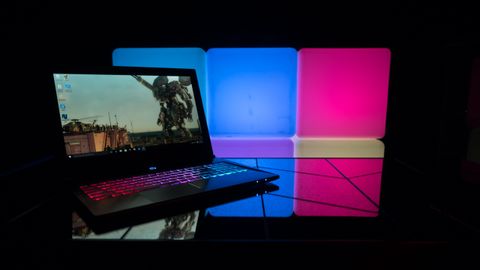 A little expensive and short on battery life, this 15-inch gaming laptop has its flaws. But, despite those drawbacks, it's one of the best performing laptops we've ever tested.

For almost as long they have existed, gaming laptops have been chasing after desktop-level performance. Over the last year, Nvidia has come close to making this happen, with its Maxwell mobile graphics chips and even porting the GTX 980 to select notebooks. Now coupling in Intel's new Skylake processors, we're seeing the beginnings of an even more impressive generation of gaming notebooks that starts in part with the newly updated MSI GS60 Ghost Pro.

While Intel's Skylake processor might be best known for introducing smaller, 14nm transistors and longer battery life, its biggest improvements best serve gaming laptops. With the ability to dynamically overclock itself and some big integrated graphics improvements, the new Skylake chip (with the helping hand of an Nvidia GTX 970M) makes the GS60 Ghost Pro one of the best gaming laptops I've ever reviewed.

While the updated Ghost Pro features some new and impressive hardware, it's actually both thinner and lighter than last year's model. Measuring a mere 0.78-inches thick, the GS60 comes at a stark contrast to chunkier hardcore gaming machines, such as the Acer Predator 17 and Alienware 17.

Going thinner hasn't brought any compromises to the GS60's complement of ports. Along the sides, you'll find two full-sized USB 3.0 and a HDMI port, mini DisplayPort, Ethernet and separate microphone and headphone jacks.

There also a new "Super Port," which packs the daisy-chaining capabilities of Thunderbolt 3.0 into a USB Type C port. This in turn allows this machine to drive up to two 4K displays and quickly recharge devices.

Aside from the slightly smaller dimensions, the GS60's design has largely remained the same year over year. That's not a complaint, of course. MSI nailed a thin, light and simple look for the Ghost Pro years ago, and the black, brushed magnesium-alloy chassis has aged gracefully.

If it weren't for the "Gaming Series" badge with an LED dragon logo stamped into the center of the screen lid, it would be easy to mistake this machine for just another Ultrabook. That said, turning on the keyboard's multi-colored backlighting also helps this notebook stand out like a sore thumb.

The keyboard lighting zones effectively split the rows of keys into three sections, which you can program to glow in all the colors of the rainbow. MSI has also made the sides of every key clear. With the colored lighting turned on, it looks like someone arranged fluorescent candies on top of the keyboard deck.

Even without the backlight on, the black keycaps and their white edges give the MSI GS60's keyboard a unique aesthetic you won't find on any other mobile gaming rig.

Aesthetics aside, it just feels excellent to type on this keyboard. The keys offer plenty of travel, and they're all coated in a slightly rough, soft touch paint that adds a tactile feel to tapping out a document.

The trackpad has also seen some improvements that fix the spotty multi-touch gestures plaguing last year's model. Scrolling feels smooth and it stops dead in its tracks once you lift your fingers away. The same goes for zooming into text and rotating images; though, you'll want to turn on palm rejection to stop any accidental commands.

The only potential annoyance is the touch-sensitive surface still features a slightly rough texture. This is fine for me, but it may annoy those with subtler fingertips