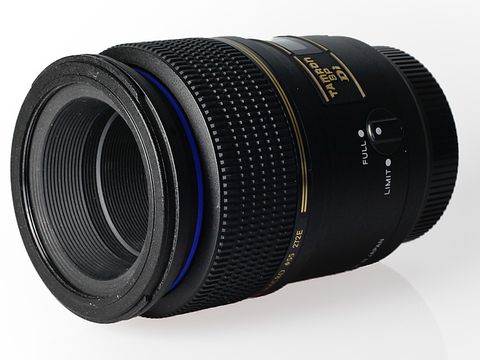 The most affordable macro option available at around this focal length, the Tamron SP AF 90mm f/2.8 Di Macro 1:1 and its previous incarnations have long enjoyed popularity as a budget third-party alternative to the bigger brands.

Available in Canon, Nikon, Sony and Pentax fittings, this latest version of the lens is also a good choice for the handful of Nikon DSLRs that lack their own motor (although with the recent introduction of the stabilised DX Nikkor 85mm f/3.5G ED VR, this lens has its work cut out if it wishes to remain popular).

Its advantage over the Nikon 85mm lens is its compatibility with both full-frame and cropped-sensor models. While it's a touch shorter in length than the more common 100mm and 105mm macro lenses, this lens still delivers a useful focal length of around 135-145mm against an APS-C sensor.

Its 1:1 reproduction ratio also qualifies it as a true macro lens, with its minimum focusing distance set to 29cm.

As part of Tamron's Super Performance range, the lens promises high resolution together with low distortion and minimal chromatic aberration. Anti-reflection coatings have been used to help it achieve the former, although these also work to keep ghosting and flare to a minimum.

The diaphragm, meanwhile, is constructed from nine blades, which is particularly impressive when the lens' price is considered.

Despite its competitive spec list, if there's one area where the Tamron SP AF 90mm f/2.8 Di Macro 1:1 falls behind its more expensive rivals, its focusing system. With no internal focusing, the lens extends to almost double its length when set to its closest distance, which makes it less suitable for close-up photography of any live subjects.

Furthermore, with no piezo-electronic motor, such as those seen in Canon's USM and Nikon's SWM lenses - such as the Canon EF 100 f/2.8 USM Macro or Nikon AF-S VR Micro-Nikkor 105mm f/2.8G IF-ED - it's also comparatively noisy.

It's not the fastest either, and it sometimes hesitates when shooting close up to the subject before confirming focus, but it's not so far behind to deem it unusable.

The lens does manage to offer a handy focusing limit switch, though, which blocks off the other side of the focusing range to the one being used when it's activated. As is usually the case, there's also a small window that displays focus distance in both feet and metres, as well as a reproduction ratio scale above this, although the latter is in a muddy orange colour that can't be seen quite as easily.

Build quality is about right for this class of lens, with a smooth plastic outer barrel and a metal mount at its rear for sturdiness. The large, textured focusing ring can be easily pulled up and down to alternate between manual and autofocus operation, although perhaps a little too easily, because it can unexpectedly change from one to the other mid-turn.