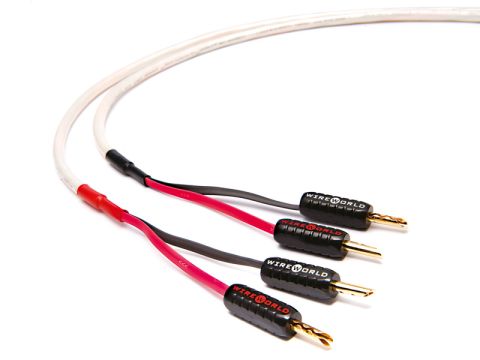 It may look basic, but the underlying cable structure of the Stream is very clever indeed

At first site the Wireworld Stream is just another 8mm circular cable, but the Stream has some very clever design under its jacket.

The main clues are the tails leading out to 4mm plugs – they're flat. And, in fact, these flat conductors (several strands laid side-by-side and insulated overall in polythene) run right through the length, gently twisted together.

To some extent this construction brings the best of several worlds, with flat conductors sitting face-to-face keeping inductance low, while twisting them together helps keep interference at bay.

Inductance isn't quite the lowest on the market, but it's a step in the right direction and this cable is a lot easier to strip and terminate than some!

We found the most impressive areas of this cable's sound to be the extremes. It seemed to add a small, but consistent extension to both bass and treble: or rather, we realised after prolonged listening, it is very clean and clear at both extremes.

In fact, the bass is neither remarkably weighty nor quite as tuneful as some, but its good control makes for satisfying long-term listening and the odd surprise when a sudden dramatic moment comes along in the music and proves that there's no lack of body. This kind of understated subtlety is rare in cheaper cables.

Something similar happens in the treble, which is never overtly bright or shrill. Occasionally, we would have liked a little more insight in the midrange, but in general detail is good and imaging clear and stable.