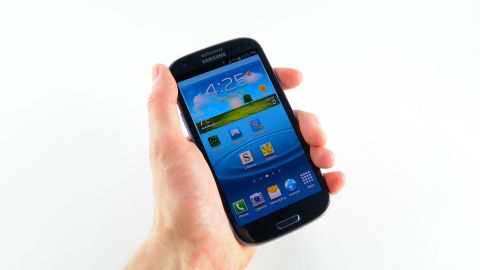 When it comes to contacts, the Samsung Galaxy S3 doesn't really stray that far from where the S2 left off – especially since the Ice Cream Sandwich update landed. This means a pretty average-looking list of contacts, with each tagged with a photo from either Google, Facebook or one you've added in yourself.

You may have noticed that Twitter is missing from that list - and that's because the social networking service has been removed from the contact integration. We first noticed this on the S2 ICS update but we're dismayed to see the same thing from the Galaxy S3.

Given it's been a stalwart for so many years on Android phones, we're not sure why it's been omitted from the S3 - the One X is all over it like a beaver at a wood-carving convention.

One of the big plus points of Ice Cream Sandwich on the Galaxy Nexus is the ability to see large, high-res pictures of your friends rather than teeny stamp sized pixellated messes - so we're really confused as to why the S3 has chosen to go down the latter route. Despite there clearly being a large enough space next to the square pic to have a much longer icon, the S3 won't let you choose such a thing.

This space is reserved for Google Plus updates, but given you're only going to have 1 in a 100 friends on the service and even fewer posting, it seems like a real error of judgement on Google/Samsung's behalf.

It's to the credit of the Galaxy S3 that you can choose the location of your picture for each contact, meaning you can have Google+ for some and Facebook for others, but the fact that even high resolution pictures are shrunk down to smaller versions is confusing.

Add to this the fact the picture will stretch when you get a call from said friend, and we can only recommend you head into the Facebook app and manually add their picture from a profile - which is both time-consuming and stalkerish.

Let's not get too hung up on the fact that the contacts system is uninspiring though - it's still one of the best out there even if it is mostly stock Android.

For instance, you have not only a dedicated ringtone but a dedicated buzz pattern so each person is still recognisable in the pocket, and from the menu system you can set defaults on everything from email addresses to names.

Plus the fact there are loads of ways to save contacts in other places - Samsung's online account mirrors Google's by letting you merge them all together, with the added bonus that Sammy's doesn't have the same online mishmash of names when you go to browse it.

That said, the linking of contacts with social networks isn't as impressive as we've seen on the likes of the HTC One Series, where pressing the 'joined' section rarely gets you connected with the right person from Facebook if the names aren't identical.

It would be really nice to see the same suggested links we get from other manufacturers, but in these days of overly-litigated patents, perhaps that's simply not allowed. So we'd suggest you allow a good two hours to draw in all the contacts you can and then get all the pictures and defaults all in place.

Not ideal, but once it's done you'll be cock-a-hoop with the ways in which you can see your buddies.

Calling on the Samsung Galaxy S3, to put it bluntly, couldn't be better in our eyes. Sure, it's a relatively simple function in today's smartphones, but it's still often ruined by brands not giving it enough attention.

Take the likes of noise reduction - in our tests, the S3 came out top in terms of calling the same person with traffic and wind behind us. Even walking past a building site the only criticism we were given was 'it's a tad windy, isn't it?'.

There's a new feature with the software update that allows 'Extra Volume' to be added in call (accessed through the settings menu) and it really does boost the volume from the earpiece - which was good to begin with.

Signal quality seemed to be average - we didn't notice any significant drops, but in the areas where we've had notoriously poor signal before (on the 3 network) there weren't any more bars of signal available to us.

But given dropped calls were very rare, we can't label this as a negative.

Then there's smart dialling - again, nothing special but we really miss it when competing phones like the iPhone or those in the Windows stable don't allow it. Simply pressing the numbers will call up the corresponding letters, making tapping 323 the easiest way to get to 'Dad'.

Video calling is also well-integrated, with those on a similarly-enabled phone quickly picking up our facial features, even over 3G. The effect was pretty smooth and clear too - when you'll use it is still debatable, but we were impressed nonetheless with the 1.9MP front-facing camera.

And for those worried about calling over Bluetooth, worry no more. The Samsung Galaxy S3 supports apt-X codecs, which produces some of the clearest sounds from a headset yet. And if you want to disengage the headset halfway through a call, two quick taps will see you talking via your ear (not literally) in a second.