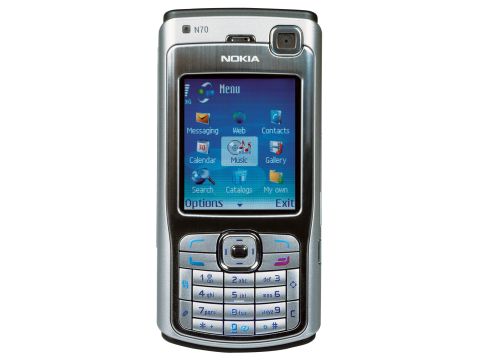 The brushed silver casing lends an air of sophistication

The N70 looks good, but pictures and sound are both inferior to other models on the market.

Until very recently, Nokia has been the manufacturer of choice for those wanting to experience Mobile TV. It is not the unrivalled reputation or technological skills of the Finnish superbrand that are needed. It is simply that nearly all of Nokia's 3G handsets have been smartphones. This has allowed them to download and run an add-on package of software (written by MobiTV) that has facilitated the television service for early services.

This programability is no longer essential for getting MTV, Nickelodeon, Channel 4 and Sky's Mobile TV (from Vodafone) on your mobile. But having the upgradability of the Symbian S60 operating system still has significant advantages. The N70 also has the ability to add a library full of business, educational and recreational software.

The N70 is available on all of the networks and can even be bought SIM-free for around £300 if you want to use it on pre-pay. It's a classic candybar design, but one that also offers a look of sophistication. In the Orange model tested here although well over half of the screen is used for the TV picture, there is no facility to rotate and expand the image to take up the full area.

You can pump up the volume of the speakerphone to a higher level than with most other phones but its performance can be hissy. Sound performance improves when using the supplied iPod-white headset, and when auditioning the phone's MP3 facilities but the sound quality is inferior to other comparable models.

Photographs also turn out to be a bit of a disappointment. There's a two-megapixel camera on offer - but its pictures weren't fantastic. There is no focusing control, so close-ups are poor, lowlight images were grainy, and there was a slight yellow cast to our shots.