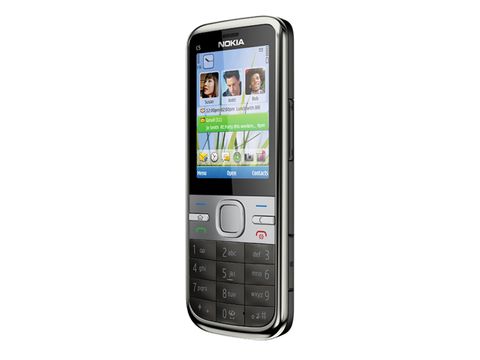 A nice phone to ease older user into the era of apps; newer users might want to look elsewhere

We've now published our review of the updated touchscreen version of this phone, the Nokia C5-03, so check it out if you're into a bigger screen and fewer keys.

In a world where the attention tends to go to ever more advanced smartphones like the HTC Desire and Apple iPhone, it's easy to forget that it's not the 'smart' that's supposed to be important – it's the 'phone'.

The fastest processors; the most vibrant colour screens; apps upon apps upon apps… these have only really become vital in the last three years.

What did we do before that? How on Earth did we judge which phone to buy when multitasking was only really argued over as part of the gender gap?

We all just bought Nokias, didn't we?

Just looking at the Nokia C5 brings back the memories of when phones were phones, and your damn desktop PC barely hit the 1GHz mark.

It's not that the C5 looks old-fashioned or out-of-date – it's just a reminder that Nokia pretty much perfected the design of mass-market mobile phones back in 2003.

You don't need the Nokia branding to know who made this phone. The two softkeys with their nondescript horizontal lines, the green and red call buttons… what else could this be?

Though Nokia is treading increasingly into the space of the new breed of smartphones, it still has products for the less technically-inclined – we looked at the 7230 back in March.

The C5 is something of a half-way house. We have the candybar shape, and the old faithful Symbian S60 operating system on a meagre 2.2-inch screen, but there's a wolf lurking under this woollen disguise.

Several handy apps come preloaded, including Ovi Maps and Facebook, and there's access to the Ovi Store, and the goodies contained within.

While HSDPA 3G mobile internet access is raring to go, Wi-Fi is lacking from the feature list, which is a shame, but not unusual for this type of device.

The C5's build quality is excellent, and actually has a bit of a Desire look to it, though the colour is a kind of gunmetal grey rather than brown.

On the other hand, it's still less than 100g, so you won't exactly be struggling to balance it.

The battery plate is a lighter colour than the rest of the back, while there's a shiny trim around the edge that almost seems to flow into the buttons via the Home and Cancel keys, and the D-pad.

The keys on the numberpad are each curved slightly, with a high point in the middle, making touch typing as easy as can be.

Above that, the full list of buttons is two softkeys, a D-pad with a Select key in the centre, Call and End buttons (with the latter moonlighting as the power), and a Home key and Cancel key.

There's no external media or camera key here, save for the volume buttons on the right-hand side, but we don't count those.

On the C5's top we find a 3.5mm audio jack, a micro-USB port and a tiny Nokia power connector. It will charge from the USB port, but the included cable is about three inches long.

On the right-hand side, below the aforementioned volume controls, is the microSD card slow. A 2GB card is supplied, with up to 16GB supported.

When plugged in, the memory card will appear on your PC as an external drive, which you can then drag and drop files to and from. The install files for Nokia's Ovi Suite are on the included memory card, so you can install that if the fancy takes you.

In the box you find the mentioned 2GB microSD card, short USB cable, mains cable and earphones with microphone clip.

Pop off the back cover (which manages to be both secure when on and easy to remove, unlike some phones) and you'll find the removable battery. You need to take the battery out to get the SIM card in, just below it.

Also on the back at the little loudspeakers. These are capable of a surprising amount of noise, but are still drowned out without too much difficulty.

Finally, there's a 3.2-megapixel camera sunk into a slight recess on the C5's back, with a tiny LED flash. On the front is a VGA resolution camera for video calling and other camera use.