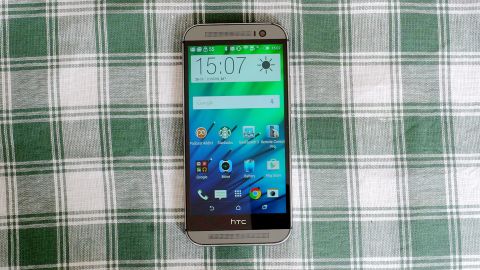 The HTC One M8s' screen is less remarkable at this point. It has a 5-inch 1080p LCD display with a Gorilla Glass top coating. Over the last 18 months we've seen the entry level for 1080p screen phones come right down, close to £100 in some cases. It's no guarantee of greatness.

The HTC One M8s has a decent screen, but it's a couple of leagues below what you get in a phone like the Samsung Galaxy S6. While you can get the QHD resolution LG G3 at a similar price, resolution is actually the least notable of the screen's, admittedly minor, issues.

What struck me when I first looked at the HTC One M8s was that, like an increasing number of phones, its colours are somewhat over-saturated. Next to the Google Nexus 6 it appears positively restrained, but the over-saturation is there. This is fine. Just as people like a bit of extra bass in their headphones, most like extra colour in their phone screens.

However, the skew of the HTC One M8s isn't perfectly managed. As well as having a slightly cool colour temperature, green tones are emphasised more than other colours. And turbo-charged greens end up looking pretty sickly.

Let's be clear: we're not talking about a green cast to the screen, but how intense green tones appear. It leads to a tone that, while nice, isn't as satisfying as the best phones around.

It's like HTC has tried to achieve the same results as Samsung's OLED screens and Sony's Triluminos technology (surprisingly, it's not just marketing waffle) with a more conventional LCD screen. And it hasn't quite pulled it off.

There are no controls in the Settings menu to tweak the saturation or colour tone either, which is a shame.

Other aspects of image quality are good, though. Black levels stay decent for an LCD even when the brightness is cranked, better than the Sony Xperia Z3+, and with 441ppi sharpness, is just about perfect.

Get right up close and you can see a bit of granularity compared with 5.x-inch QHD phones like the Galaxy S6, but there's not a great deal in it.

There's still some work to do on the reflectivity of the screen itself. Turn the display off entirely and there's a slight greyness that comes into play when you try to use the HTC M8s in daylight. Outdoors visibility is respectable thanks to the bright display backlight, but could, and perhaps should, be better.

This is not meant to be a demo of the latest and greatest HTC has to offer, mind. The HTC One M8s uses an SLCD2 panel where SLCD3s are available, and it uses Gorilla Glass 2 when version four is doing the rounds. Both of these are more dated than what's found in the One M8.

Viewing angles are very solid, though. The HTC One M8s fits into a category of 'fine for the money, but not standard-setting'.

So far, the HTC One M8s seems an awful lot like the HTC One M8, and it has most of its extra features too. You get 4G, Wi-Fi right up to the ac standard, and Bluetooth 4.0 with support for the aptX Bluetooth audio codec. This is particularly important if you have a nice set of wireless headphones.

NFC is here too, something that will become more important over the next 12 months as Android Pay has a crack at taking over the high-street. While you're just as likely to have used it for pairing Bluetooth accessories, NFC can also be used for wireless payments.

The HTC One M8s doesn't have everything, and actually lacks a feature we assumed it would have. See the black bar on the top edge of the phone? One of the neat (deliberate) side-effects of this design in the HTC One M8 is that it hides the IR blaster. Here we get the black top bit, but no IR blaster.

IR transmitters can be used to mimic the signals of the remotes for your TV, Blu-ray player, and more. It's not an expected feature at any price, and about 70% of people I know who own an IR phone don't even know about it, but it's still kinda neat to have.

Prev Page Introduction and design Next Page Interface and performance