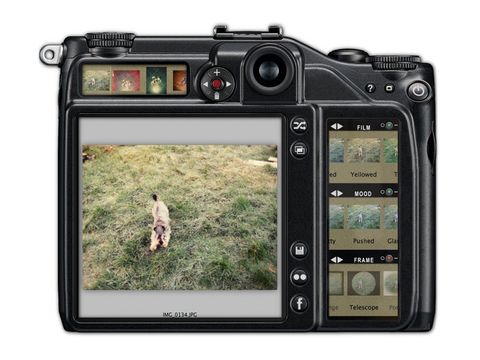 Gladly, Lo-Fi gets a full set of marks for differentiation, but, sadly, no marks for usability

The huge success of iPhone apps such as Hipstamatic shows that retro is 'in' when it comes to photography.

People can't get enough of making their snaps look like they've just stepped out of the 70s, or been taken with a Lomo camera held together by sticky tape rather than, say, a rather expensive iPhone 4.

Lo-Fi brings photographic effects like these to your Mac, although it also makes the unwise decision to bring an iOS-like interface with them.

Lo-Fi appears on your screen as a virtual camera. You drag one or more images to it, which appear in the camera roll, and you can then drag 'film', 'mood' and 'frame' strips at the side of the camera, which update your image accordingly.

Each of the three categories can be disabled at will, and there's also a shuffle button, which randomises the current setup for fun. When you're done, you can save your image or upload it to Flickr or Facebook.

The images Lo-Fi outputs are generally pretty good, adding character and texture to bland snaps (although the frames are poor and should be avoided).

However, we didn't enjoy using the app much. The interface is clunky and fiddly, wasting space with a fake camera graphic that would be better put to use showing your image and the various effects.

It's also too expensive compared to the competition: CameraBag Desktop is $10 cheaper and more usable, and PhotoStyler is about the same price, but has a sleeker interface and also enables you to change the settings of many of its available effects.

As such, we can't help but recommend one of those instead.