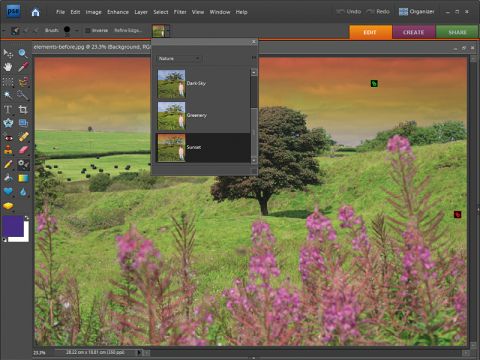 With a handful of exceptions, Elements has most of the same photo-manipulation tools as Photoshop

There's not a lot here that's genuinely new. Yes, it's still the best mid-range image-editor for keen photographers, and our verdict reﬂects this. But if you already own Elements 6, there's not much point upgrading. And that's not all. Keen photographers who already know what they're doing are in danger of being submerged beneath a welter of walkthroughs, and automated 'ﬁxes'.

Elements might be seen as a low-cost Photoshop substitute, but there's a little more to it than that. Photoshop is a professional graphics application (not just an image-editor) with tools and functions most photographers will never need.

And all this comes with a price tag of £570 – that's nearly eight times the price of Elements 7.

In fact, with a handful of exceptions (mainly Curves and Layer Masks), Elements has most of the same photo-manipulation tools as Photoshop. Besides, it also comes with Adobe's excellent Organizer image cataloguing program (though not with the Mac version, alas).

It's improved in this version with the addition of a text-search box, so that you can start typing in the keywords of the photos you're looking for and the Organizer will have their thumbnails ﬂashing up on the screen even while you're typing.

It's a really useful feature, though it's also one of those things where you think, "hang on, why wasn't that there in the ﬁrst place?"

The main enhancements are to be found in Elements' Edit module, and the most interesting of these is the Smart Brush. Here, you choose the kind of adjustment you want to make (Blue Skies, Whiter Teeth and many more) and then paint it over the area of the image you want to alter.

It's like a combination of the Selection Tool and an Adjustment Layer all in one. As you drag the brush, the area selected is highlighted and you can see the adjustment applied 'live'. When you've ﬁnished, the Layers Palette shows Elements has created a new image Layer and a mask above the original image. It's possible to change the areas selected and change the effect settings.

It sounds a lot smarter than it actually is, though. For a start, the Smart Brush applies effects which could be applied via a different route using the existing tools – it simply automates the process. Second, the selections aren't always terribly good. Hard edges can show narrow fringes where anti-aliased pixels haven't been selected, and out-of-focus edges are delineated artificially.

It's hard to get too worked up over the new Guided Edit tools, either. Here, for example, you're shown how to correct keystone distortion, or apply an artistic 'pencil' ﬁnish, add a 'slimming' effect to people shots or add captions to your picture. Again, these are things you could do with the existing tools. These are new explanations rather than new functions.

Tidy up your photos

The Scene Cleaner is new, though, or at least an extension of the existing Photomerge compositing tools. Let's say you're taking a picture of a tourist landmark but you keep getting people walking in front of the camera. You simply take two or more shots and use the Scene Cleaner to get rid of the people!

It really does work, too, and will tolerate some misalignment between shots (it realigns them automatically). However, you do need to take shots at the same time from the same viewpoint with this process in mind. You can't just ﬁnd two similar-looking snapshots and expect Photomerge to be able to match them up.

Finally, it's worth mentioning the new Surface Blur ﬁlter, too, since this is touted as a great way to smooth complexions, say, without losing edge detail. It does, sort of, up to a point, but the effect is rather like the overaggressive noise reduction in some cameras at high ISOs. It might be useful in some circumstances, but don't count on it.