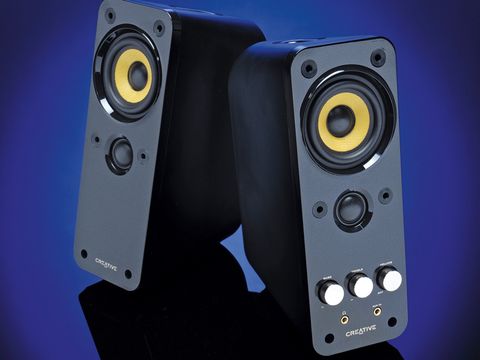 Offering stunning sound and great aesthetics for an equally impressive price, the T20s will transform your Mac's media capabilities

Back in April 2008 we looked at Creative's Gigaworks T40 desktop speakers, describing them as beefy, deep and punchy.

At only approximately £10-20 less than their big brothers, the Gigaworks T20s are aimed at users who want a smaller footprint without sacrificing too much in the way of sound quality.

Sadly, unlike rivals such as Logitech's Z-5s, the speakers are mains powered via an external power brick, ruling out their use as mobile laptop speakers. That said, the weightiness of the cones means you'd need a few sessions in the gym before attempting to carry these around for any length of time.

The set comes with removable grilles; when attached, the speakers melt subtly into the background as understated black boxes. With the grilles off, the woven gold cones and piano-black fascias stand out, oozing the same audiophile quality that we'd expect from speakers costing ten times the £50 asking-price.

The majority of refinements over the original T20 series are aesthetic; gone is the blue LED from the front panel, and in is the subtle glow around the power/volume knob. The previously standard silver headphone sockets are now gold-plated.

There are notable changes in acoustic construction, too; a comparison between the first and second series reveals changes in the shape of Creative's BassXPort. Internally, the majority of the cabinet is empty space to allow bass frequencies to resonate; and while this works well for a speaker this size, it does result in a slightly thuddy sounding bass response that can sound unnatural in some genres.

At higher volumes, though, the speakers begin to reveal their weaker points; low frequencies in some tracks cause strong vibrations through the cabinets, and the overly bright response from the tweeters gets a little wearing after a while. Thankfully, both these issues can be easily rectified using Bass and Treble controls on the speaker's front panel.

At normal listening volume, though, they're impressive, with crisp, clear high frequencies and excellent stereo separation. We found that they need to be at least half a metre away from you to sound their best; in fact, they really come into their own when used from a few metres away.

They're a fantastic choice if you watch DVDs on your iMac and need a pair of compact speakers that'll provide decent sound.