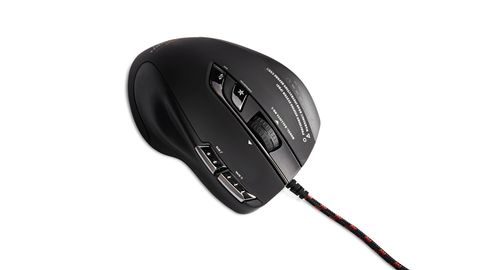 You probably don't recognise the name Shogun Bros, but you might have seen its first mouse, the Chameleon, in last year's CES coverage. It was the bizarre rodent that could be flipped over and used as a gamepad.

Now the Hong Kong-based company is back with a more serious gaming mouse, the Ballista MK-1, and it's rather impressive.

The curves of the Ballista MK-1 are classic right-handed ergonomics, immediately separating this mouse from the Roccat Lua. There are many other differences too, not least the use of more precise laser tracking as opposed to optical tracking, making the Ballista a much more fully functioning game-centric mouse.

Shogun Bros is new to the UK, and hopefully by the time you read this it will have sorted out distribution over here as well as in the US. It has a neat line in compact mech-switch gaming keyboards too, so I'm welcoming it with open arms.

The headline feature for the Ballista MK-1 is that huge 8,200dpi setting, but for me the general performance of the mouse is more interesting. At the top dpi setting I find it too easy to lose my bearings mid-frag - a little jolt of the wrist and you're facing the opposite direction. Still, 5,600dpi is precise and pretty darned rapid. The switching is intuitive too, letting you flick between dpi settings on the fly via a switch by your thumb.

Personally though, it was the smooth tracking of your mouse movements that really warmed me to the Ballista MK-1. Despite the rapid movement that comes with those seriously high dpi settings there was never a time where it felt jerky or twitchy. Fine-grain movements were possible, and smooth tracking shots also became second nature.

I'm not going to say the Ballista suddenly made up for my general lack of twitch-gaming skills, but it certainly made sure that I had nothing else to blame for poor performance but my own dearth of proficiency.

Shogun Bros has also added in a further set of programmable buttons to complement the side-mounted forward/back buttons next to your thumb. These sit by the right mouse button, and are surprisingly easily accessible during battle. It may take a little bit of getting used to their placement, but they become useful accessories when you do.

The added macro creator in the Shogun Bros software is also impressive, allowing a full range of macro recording to be tied into any of the programmable buttons, in five customisable profiles.

Inevitably though, for such an ergonomically designed mouse, the Ballista is going to immediately antagonise the left-handed gamer out there. While you can switch around the primary and secondary buttons easily enough, it's never going to be comfortable to use in the left hand.

But that's obviously only an issue for lefties. For the rest of us the Ballista MK-1 is a nicely designed, well-weighted gaming rodent with incredible precision. It won't suddenly make you the best Planetside gamer in the world, but it does mean that you can't blame your tools.