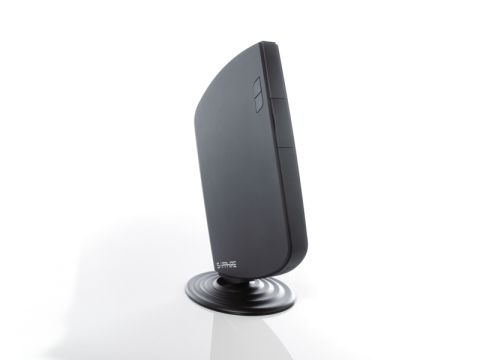 A tiny box that's ideal for media, but not for games

Back in 1965, Intel cofounder Gordon E Moore proposed that the number of chips that could be placed on an integrated circuit would double every two years thanks to shrinking manufacturing processes. This effectively doubles the speed of processors, and Moore's law has held up ever since.

It does need amending, though. As dies become smaller, the residual lower-end chips get cheaper. Intel's ubiquitous Atom chip is an example of this; rather than making a more powerful processor, Intel made one that could run with minimal power, and thus the netbook was born.

Continuing this paradigm – let's call it Winchester's law – it holds up that everything should get physically smaller – not just processors. Half the power, half the size.

Netbooks have been a big part of this trend, relying on tiny parts that just about do the job, rather than the uber components you find in power-hungry desktop PCs. The affirmation of this is Sapphire's Mini Edge HD.

It's about the same size as an average paperback, and it's the smallest PC we've ever seen. It fits firmly in the 'net-top' category, meaning it's essentially a netbook without a screen.

As is expected with such devices, there's an Atom Processor at its core; this time a dual-core D510.

Nvidia's Ion is responsible for the HD output, and it's meant to be one of the most powerful graphics chips available in such a device, capable of the holy grail of tiny PCs: gaming.

Nvidia believes it to be about as powerful as the graphics chips you'll find in mid-range laptops, and it's therefore capable of playing titles like World of Warcraft and Spore, but a bit stretched when it comes to the likes of Call of Duty and Crysis.

Unfortunately, when we came to benchmark the chip in our Mini Edge HD, it fell over. It seemed to be a driver issue, as it crashed to the desktop when we booted up the evergreen and fairly undemanding Left 4 Dead, without even giving us a glimpse of the game.

It did manage to run all the 3DMark 06 benchmarks without falling over, but even then it only mustered a fairly low score of 2,521.

This result isn't hugely surprising considering Ion was designed to be a media chip first and foremost, and not specifically for gaming at all. What is surprising is that Sapphire has chosen to release it.

The Hong Kong-based company has – until now – been exclusively associated with AMD (formerly ATI) graphics cards, with the emphasis firmly on gaming. Yet this is an Intel and Nvidia-powered machine, which must surely be the computing equivalent of changing sides halfway through a war.

We couldn't get a response from Sapphire when we enquired as to why it had changed allegiances so dramatically, and why it had seemingly given up on the gaming side of things altogether. The Mini Edge HD, then, could undo Sapphire as a brand among gamers, but at the same time it could introduce it to a whole new audience seeking small PCs to stick next to their whopping flatscreens.

In every other respect it performs admirably, capable of 1,080p high definition output without a huge wattage surge. It's tiny enough to sit unnoticed next to – or behind – a television, and it barely makes a sound.

To save costs, it ships without luxuries like an operating system or a mouse and keyboard, but with LinuxMCE being free, and wireless keyboards and mice now costing buttons, it's a fairly cheap and sleek way to get hold of a fully-fledged media centre PC.

The Mini Edge HD's biggest competitors aren't other media centre PCs, though. The Xbox 360 and PlayStation 3 cost about the same, but are also capable of running the latest games in HD. If you're after a replacement home or office PC for browsing the net and watching the odd film, the Mini Edge HD fits the bill perfectly, but its form factor and connections are crying out for proper PC games.

If it could manage that, it would do Sapphire and PC gaming a world of good. If Winchester's law stands, though, machines like this are only going to get smaller, not better.