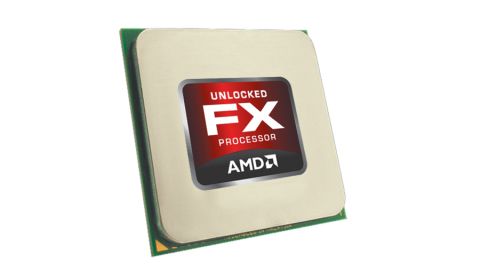 When AMD was throwing around the specs of its first bulldozer chips we all sat up and took notice. After all, it was AMD's first new CPU technology redesign for an absolute age, and what it was planning on doing with the new bulldozer microarchitecture looked pretty darned revolutionary.

Sadly for AMD though, its top chip could barely keep pace with the second tier of Intel's Sandy Bridge CPUs. Then it released the 22nm Ivy Bridge die-shrink and things got even more miserable for the Texan chip company.

But, as we've seen over the last few months, those AMD Bulldozer chips still have something to offer. Maybe not the top-end eight-core FX-8150, but the great value and overclocking capabilities of the six-core FX-6200 made it a tantalising prospect for anyone on a budget looking to put together a gaming rig.

Value is core to this arrangement, and being able to put together a decent AMD CPU/mobo combo for less than a Core i5 setup means that you get a good chunk of cash to spend on your graphics card. In fact, it's the difference between being able to pick up a HD 7950 or a HD 7870. And we know which we'd rather have humming away in our machine.

Now, with the Piledriver update to the Bulldozer architecture, we've got the latest FX chips hitting the market under yet another codename: Vishera. Can the revised architecture close the gap on the Intel Ivy Bridge rivals, and give its CPU range a performance shot in the arm to match its value credentials?

Strap in, I'm going to talk about architecture here. The original Bulldozer design was a pretty radical shift in terms of the change from the Stars architecture found in Phenom. It created Bulldozer modules with a pair of 'cores' in each, sharing some lower utilisation silicon such as level-2 cache, fetch and decode components, while the more vital, time-sensitive parts, such as the integer pipelines and level-1 cache were part of each 'core'.

To try to amend this, AMD has gone and done a little light restructuring of the Bulldozer modules via this Piledriver update. We've seen the first implementation of this new design in the recently released Trinity desktop chips, but this is the first time we've seen it in a dedicated desktop design.

Essentially this isn't a major overhaul - just a few serious engineer-pleasing improvements such as better branch prediction, better hardware prefetching and improved scheduling. There are some other under-the-hood enhancements, but all in all it's relatively low-level stuff.

For the real architectural improvements we're going to have to wait for the arrival of the Steamroller update some time next year. That's set to give the individual 'cores' more dedicated hardware to make them more like the traditional core design. Steamroller doubles up the decode engines in a module, and should make for improved single-threaded performance.

That's not to say the new Piledriver design doesn't add any extra performance for your cash. In fact, this top-end FX chip is hitting the ground running at 4GHz out of the box. Eight AMD cores running at 4GHz - not too shabby.

Sadly though, the single-threaded performance hasn't ramped up significantly, so don't get too excited about garnering any extra gaming performance from this new chip.

The multi-threaded performance doesn't see a huge change either - in both segments then we're looking at around 15 per cent extra processing speed. On the multi-threading side though, that slight return isn't as much of an issue thanks to the impressive showing of the original architecture.

When you consider that the new FX processors are going to be coming out at around the same sort of price as the Bulldozer chips, that's not a bad slice of extra speed. And with the resolutely quad-core i5 3570K coming in around £20 more expensive than this eight-thread, quad-module FX-8350, you're going to be getting a substantial chunk more CPU performance straight out of the box.

Throw any multi-threaded application at the two rival processors and the AMD chip will soon show its dominance in that arena. With the i5 getting around the same sort of figures in Cinebench as the old FX-8150, the new Piledriver chip is a little over 15 per cent quicker. That performance gap gets even bigger when you chuck the HD encoding benchmark of X264 v4.0 at the pair with the FX-8350 getting almost 25 per cent better results than the Intel i5.

In fact, if you take the FX-8350's multi-threaded performance in isolation, it's suddenly getting rather close to the performance of the similarly eight-threaded almighty Core i7 3770K. In Cinebench the AMD chip is only a little over 5 per cent slower, and in X264 there's less than a single per cent difference between them. It's impressive that AMD has managed to close the performance gap this much in the multi-threading stakes.

With so many modern productivity programs really taking advantage of the extra threads on offer in today's processors, there would be very little return on the extra £100 you'd spend on the 3770K versus the FX-8350.

Unfortunately for AMD, we simply can't take the multi-threaded performance of our chips in isolation. Single-threaded prowess still counts for a lot, not least in gaming. And in gaming the Intel CPUs still give a lot more - in our tests we were looking at an extra 10-15 per cent.

As you can see from the benchmark results, the i7-3770K is still the top desktop chip on pretty much all counts, but at £100 more than the latest FX-8350 you're paying through the nose for that extra performance.

Compared with the similarly priced Core i5, the FX-8350 looks more impressive, ably beating it in any multi-threaded test you give it. In fact it's actually rather close to the eight threads of the top Ivy Bridge CPU in those multi-threaded metrics. In gaming terms though the Intel chips still retain a healthy lead in raw CPU performance terms.

With cash of course being no object to any of us PC gaming types, we would always go for an Intel CPU to prop up the best graphics card available. But if you don't have the vast salary of a PC tech journo (cough) then value for money is absolutely vital.

The fact remains that an AMD platform is cheaper than an Intel one, and that gives you more money to spend on your GPU. With a better GPU, the gaming performance gains garnered by the Intel CPU architecture become practically irrelevant. Your graphics card is most responsible for your gaming experience, so it makes sense to drop the most cash on that.

Like the K Series Intel chips, the entire FX range is unlocked, so overclocking is definitely on the menu. Well, so long as you've got a decent, OC-friendly motherboard backing it up.

We did struggle a little going through the BIOS of our Asus RoG board, but with the Windows-based AMD Overdrive software we were able to hit 4.7GHz stably. We could boot via BIOS overclocking, but once we started stressing the chip it eventually fell over.

With the AMD software though, it remained happily numbercrunching away. It's not quite the 1GHz+ speed boost you can get out of Intel's architecture, but it does give you some impressive performance gains. Running at 4.7GHz the FX 8350 is significantly faster in multi-threaded applications than even the i7 3770K at stock speeds. Of course, the Intel chip can also be overclocked, but it gives you some idea of how competitive these AMD chips can be.

In a vacuum then, the Intel chips remain the only CPUs you'd want in your machines. They are the best at gaming, and the second-tier quad-core chips remain competitive with AMD's best in multi-threaded applications. But this Piledriver update has closed the gap a little, and in terms of platform value as a whole, the AMD setup just has the edge. Spend the difference in CPU price on a better graphics card and the performance difference in games between AMD and Intel chips will instantly melt away.

Like the Bulldozer release though, the top-tier FX chip is probably not the one that we'd really recommend. The £20 difference in price is negligible, and wont make a massive difference in what GPU you go for.

The hex-core FX-6300, on the other hand, could be a much more tantalising prospect. If pricing follows the previous generation then you're looking at around a £70 difference, and that could make for that bump up to a HD 7950. The hex-core chip will also overclock happily, so you'll still get decent multi-threaded performance - easily as capable as the i5, for a lot less cash.

An equivalently priced AMD hex-core machine then would make for a better gaming PC than an i5 3570K rig with a weaker GPU. We need AMD to be competitive to keep the PC market vibrant, and keep Intel honest.

These new Piledriver chips should be able to do that, especially at the value end of the market. And if that pushes Intel to make better chips - maybe even a mainstream six-core desktop CPU - then that's got to be good for everyone too.